By JOHN SHARPE
September 29, 2012
Sign in to view read count 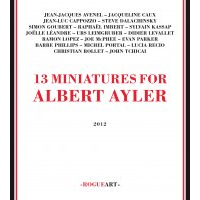 Tributes come in many forms. Most blatant is the repertory regurgitation of charts associated with the dedicatee or modern takes on that program. Then comes homage, influenced by the historical figure in question, with works in a contemporaneous style. Finally, there appears art inspired by the spirit of the honoree. It is into this last division that this disc falls, with 13 pieces titled after the names of the musicians, created by between one and five participants drawn from a cast of sixteen. None of them sound remotely like saxophonist Albert Ayler, the touchstone of the project, though each of the players undoubtedly operates in a post-Ayler universe in terms of sonic norms. The collection represents selections from a concert held to mark the fortieth anniversary of Ayler's death at Fondation Cartier in Paris, in December 2010.

While brevity can be a virtue in improvised music—witness pianist Matthew Shipp's series of successful albums, on both Hatology and Thirsty Ear, composed entirely of short tracks—the constantly shifting roster here militates against approaching each piece as a building block in the creation of an integrated suite. Consequently few tracks register with sufficient heft to persist in the memory. Of those that do, two are trios. "Ramon Lopez, Barre Phillips, Michel Portal" takes its time and is all the better for it, with Phillips purposeful and taut, while on "Jean-Jacques Avenel, Simon Goubert, Joe McPhee," familiarity means that it is possible to quickly get a fix on McPhee's combination of dissonant skronk and impassioned melodicism. But at three minutes it is just too brief. Not unexpectedly, "Evan Parker" showcases the Englishman's circular breathing which draws forth a panoply of voices from his tenor, recalling a possessed medium channeling ancestors at a séance, in a totally sui generis exhibition which again ends prematurely.

Four cuts featuring voice are mixed. The opener, "Jacqueline Caux," is a reading of an essay on Ayler by her late husband, while "Joëlle Léandre, Urs Leimgruber, John Tchicai" initially features great resonance from the Dane's alto saxophone and Leandre's formidable bass, with the Swiss yapping at their heels, but the synergy becomes less convincing as they commence a wordless chant. "Joëlle Léandre, Urs Leimgruber, Lucia Recio" mines similar territory, although the vocals are more restrained. Most fruitful is the recitation of a poem by New York poet Steve Dalachinsky, incorporating the words of Albert and Donald Ayler, over the bass extremisms of Phillips and Leandre.

However it is the concluding "Joe McPhee" which provides the most touching commemoration of Ayler's legacy, beginning with almost subliminal breath sounds before flowering in a delicate vulnerable quavering rendition of the saxophonist's 1970s composition "Voices," which takes on an emotionally charged dimension as the American blends his voice with wide vibrato smears. His directness and visceral intensity combine in a beautiful meditation worthy of Ayler in his prime.