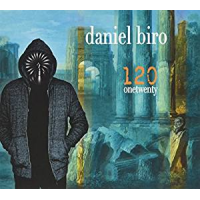 Great music is all about passion, and this is definitely the fundamental ingredient behind Daniel Biro's heartfelt new release, 120 Onetwenty. This amazing music project really blurs the lines between a wide variety of styles, including ambient, instrumental experimental composition, jazz, and a lot more. Biro is proceeding forward while simultaneously looking to the past. His stated goal here is paying homage to the challenging, futurist vision of '70s and '80s synthesizer architects such as Vangelis and Kraftwerk as well as progressive rock icons such as King Crimson, jazz fusion pioneers such as Herbie Hancock, and ambient experimenters such as Brian Eno. They all seemed to fly in a similar circle of avant-garde artistry, liberated from commercial conventions and stylistic rules. Biro relishes this creative freedom on every track; you never know where he's headed.

This project has a tasteful and understated overtone, which gives it a stark, minimalist feel. However, the sound is also rich and nuanced, really allowing Biro to come up with very expansive sonic ideas. If you closed your eyes while listening to this music, you might be able to see some beautiful vivid images—the music is very expansive and emotional, suggesting stunning visual connections. 120 Onetwenty actually has a really cinematic feel, which stands out for its powerful and emotionally relevant approach. There is nothing that sounds quite as compelling as a musician pouring his heart out, and this is definitely Biro's case.