BY EYAL HAREUVENI
December 6, 2012
Sign in to view read count 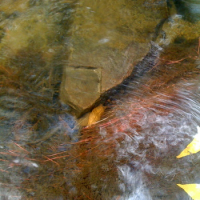 Ligeia Mare is a loose, intuitive aggregation of musicians within the Boulder/Denver, Colorado area, headed by multi-instrumentalists Farrell Lowe and Dave Wiley. Farrell and Wiley formed this outfit after collaborating successfully in a modern dance production.

The five musicians (plus a few guests) in this versatile outfit, named after a lake in the north polar region of the Saturnian moon, Titan, play several instruments—mostly percussive, prepared or modified, including overtone voices and electronics. The original, spontaneously improvised music of this outfit on this limited edition, homemade debut is a set of nuanced and open-ended sonic textures, atmospheric and cinematic in spirit.

A few of these multilayered sonic events are arresting. "House Dreams" has a disturbing, enigmatic narrative that maintains its tension throughout, even though the musical occurrences are quite spare. This event can easily be transformed into a soundtrack for a mysterious, science fiction movie. "Blue Green Shift" alternates between the soothing sounds of Far-Eastern bells and threatening, otherworldly tapestries. "Blind Naked Heart" uses light, Gamelan-tinged percussion to stress a gentle texture comprised of soft, talkative voices.

Other sonic events like "The Old Voice" sound like focused research into the elastic characteristics of new, invented sounds and their dynamics within the studio. "Mattina" evolves around light, unrelated and spare rhythmic utterances and their changing dynamics, introducing the alien beats of "Night Sky Flare." "The Hollow Reed" explores imagined musical territories with rich, new and invented sounds.

Strange, disturbing and beautiful in its unique way.