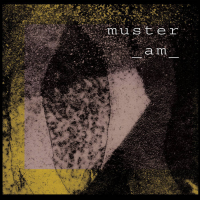 Although the duo Muster—electric guitarist James O'Sullivan and electronicist Dan Powell— were thrown together by events beyond their control, their debut album Find A City To Live In (Invisible City records, 2019) showed them to be made for each other and tuned into one another's instincts, particularly impressive as that album was created by the two swapping solo recordings and their responses to each other between their respective bases in London and Brighton.

Of course—little did they know it at the time —that methodology was ideally suited to recording an album during the global Covid-19 pandemic and its consequences. So, the first three tracks of _am_ are the results of a distanced collaboration between them during lockdown; each sent one or more improvised tracks to the other who then digested them over repeated listenings before recording their response. The originals and the responses they elicited were subsequently mixed together and edited, the end result being the three tracks, "Tine," "Verser" and "Oned," which together play for just over twelve minutes. As with the tracks on Find A City To Live In, the three pieces do not betray the methodology used, but sound as if O'Sullivan and Powell were sitting together, playing and reacting to one another in real time; each of them is a tight, focused improvisation which stands up well to repeated listening.

In a break with the above methodology, "On the Hoof," the final track on _am_ , was recorded live in concert, in June 2019 at the Horse Music Improv Club at Iklectik, London, and runs for over twenty-four minutes. Despite being performed live in person rather than being edited and constructed, the piece is recognizably from the same source as the album's other three tracks; Muster have their own trademark sound, based on their individual styles and the interaction between them. Heard blindfolded, one would not immediately say that the music was produced by two players, as the duo produce a rich soundscape full of variety and interest. On the basis of "On the Hoof," once the dust settles after lockdown, it sounds as if Muster should consider getting together and playing live more often, in addition to their successful long-distance liaisons.

Tine; Verser; Oned; On the Hoof.