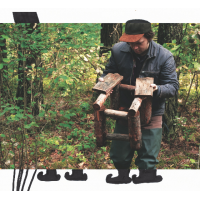 It's always interesting to discover how the rest of the world views your country and this, the second album by Strigalev's six piece Smiling Organizm, was apparently inspired by his time in England. So while we might reasonably expect a paean to the joys of tea, queue etiquette and appalling public transport, the mirror Strigalev holds up instead highlights "nature... humour, heroism, strong personalities, love, rebelliousness and... some stupidity." Well, I guess it could have been worse!

There is however a certain eccentricity in what Strigalev and his band do here that is very English -perhaps suggesting that his time in England could be part of a long and happy association. Title track "Robin Goodie" is a good example of the highly individual approach—the title is intended as a portmanteau combination of Robin Hood and Boogie Woogie, the music a mixture of what feels a mock heroic theme, balanced by Strigalev's effective sax contribution, and the propulsive bass from Larry Grenadier and Tim Lefebvre. Halfway through the ensemble stops suddenly, leaving Strigalev to announce "I am Robin Goodie" before the trumpet from Ambrose Akinmusire spins out opening up an excellent solo section.

A feature of the album is the importance of the rhythm section that lays down a bed of fusion beats and rhythms onto which straight ahead jazz is grafted. Larry Grenadier on double bass and Tim Lefebvre on bass guitar and subtle electronic shading are featured prominently on several compositions such as the opening track "KUKU." Here a bass pulse, that is clearly not bop derived, is the foundation for a piece that would not be out of place on, say, a late Sixties Miles Davis Quintet record. A track like "Sharp Night" sounds like an old bop record played in an unusual time signature, somehow managing to keep things fresh balancing the melodic core of much pre-fusion jazz with the rhythmic primacy since.

Its not all impossibly clever genre juxtaposition though—a band this stellar could play anything it put it's mind to after all. So if you would prefer to remain in more traditional waters "Unlimited Source of Pleasure" is a lovely, ensemble piece of straight ahead jazz and "Renduta" is another highlight that should appeal. The latter strikes up a lively engaging tempo from its initial sax led theme with Akinmusire's trumpet solo particularly great, impressionistic in style, hinting at a path then withdrawing. Underneath that solo the tension is built by a fabulous piano & bass combination, later released by an abrupt shift back to a bop-style bass run. Taylor Eigsti's excellent rippling piano work must also be mentioned in despatches here.

It's rare to find an ensemble recording that feels so well balanced—the considerable individual talents supporting the whole, rather than allowing one or two players to dominate. That can make the album feel a touch dense at first, but it opens out after a couple of close listens and the themes linger long in the mind. The band are drawn from some of the finest players in modern jazz—tribute to Strigalev's talents as both a composer and arranger. If the name feels awkward, it is at least memorable and, on talent alone, we will hopefully be talking of Zhenya Strigalev's Smiling Organizm as 'a big name in jazz' and not just mean the number of letters!