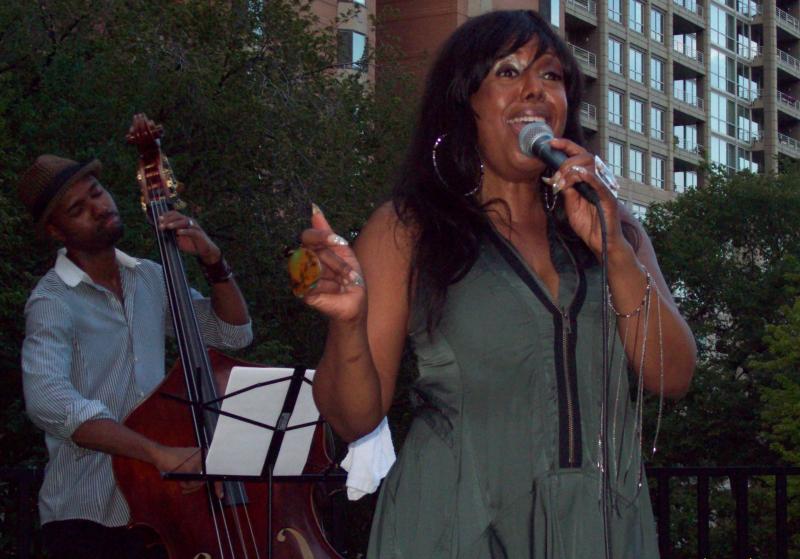 The weather on Tuesday evening was perfect in downtown Chicago, in contrast to the previous two weeks, when the city was ablaze with 90 degrees-plus temperatures. Thankfully, the weekly outdoor concert series, Tuesdays On The Terrace, presented by the Museum Of Contemporary Art Chicago, enjoyed a cooler and more pleasant ambiance.

The summer weekly event that showcases live music performances, outdoor dining, art displays and an exquisite wine selection, played host to an evening of jazz, performed by songstress Yvonne Gage. "I'm very excited about performing at Tuesdays On The Terrace" exclaimed Gage—who, for the first time, was joining other Chicago quintessential jazz musicians in the museum's summer lineup. "This will hopefully be the first of many."

Gage is a Chicago native who began her music career at the age of 14. She has since transcended from R&B to jazz, where she performs with her friend of 10 years, pianist Charlie Johnson, and bassist Junius Paul, who joined the team two years ago.

The Tuesdays On The Terrace program started with a formal introduction from jazz radio station WHPK 88.5 FM, that highlighted the accolades of Gage, Paul and Johnson. And when the trio took center stage, the terrace quickly became standing room only, with the audience flowing from the upper dining level to the lower grass patio.

"I can't find the words to express how happy she makes me feel each time I hear her," admitted Barbara Gage, Yvonne's cousin and personal assistant. Barbara enjoyed the concert from one of the best seats on the terrace. "It just gets better and better, like sensuously off the meter!"

From the opening song, "What A Difference A Day Makes," Gage's sultry voice serenaded over 300 patrons in attendance, reminiscing the audience to jazz sounds of yesteryear. "The greatest for me of all time is 'the divine one,' the sassy Sarah Vaughan," explained Gage as she described her favorite jazz artist. "I would like for my audience to experience a passionate musical connection with me at each and every performance."

Gage affirmed her love for jazz in each song, by effectively using her voice like an instrument, hitting every tone with sharp clarity and embodying the style of past jazz greats in her performance of "Night and Day" and "My Funny Valentine."

Her longtime friend Mike Clay was also in the audience. Clay has seen Gage's earlier performances in her career and witnessed her growing passion for the jazz genre. "Yvonne has an incredible voice," said Clay, who attended high school with Gage. "Over the years, she's made a seamless transition to jazz, which is where her heart is. I was really impressed by the way she gave the audience a solid performance."

The concert went well past sundown, and Gage became more engaging, breezing close to the seated patrons as she performed Billie Holiday's classic "Good Morning, Heartache." "Music awakes the romance in me and it's also therapeutic," expressed Gage, "we should all have some!"

This is not the first time jazz aficionados in Chicago have seen Gage as a headliner in town. Gage recently performed in the "Eleven Jazzy Divas" musical concert this past spring, held at the DuSable Museum of African American History. Gage was one of eleven notable female jazz singers who paid tribute to the musical accomplishments made by legendary African American female vocalists. "11 Divas is such a wonderful concept. No two talents were alike," expressed Barbara Gage, who attended that event as well. "The camaraderie and energy was admirable, to say the least. It's fabulous!"

Johnson and Paul both were dynamic in their solos during "You Go To My Head," and in their bouncy version of "Summertime." But it was their unique musical arrangement of the snappy jazz tune "(Get Your Kicks On) Route 66" that got the crowd singing along in chorus. "There are a few things that help me choose the songs that I sing," explained Gage, "First, the melody is most important, and last is tried and true. I've performed a particular song before, and I already know that my audience loves it."

Gage, Johnson and Paul created a magical evening by taking the audience back to a time when jazz was new and inspiring. And when Gage closed her concert singing Etta James' classic "At Last," she received a rousing applause from friends, admirers and newfound fans, who clamored to purchase her classic CD, Yvonne Gage (PassionFrye Music, 2006), and to take pictures with the starlet. "They love her," expressed Mike. "She received a standing ovation at the end of her performance. Now that's impressive! She's a professional."