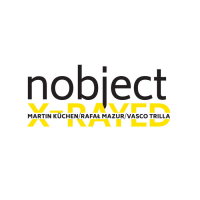 This double CD presents the final date in Lodz of a short Polish tour by a multinational co-operative trio which goes under the moniker Nobject. The band comprises Swedish reedman Martin Kuchen on saxophones, Catalan drummer Vasco Trilla and Polish acoustic bass guitarist Rafal Mazur. Although X-Rayed is the outfit's first release, the trio had toured previously in 2018, and Küchen and Mazur recorded before on Baza (NoBusiness, 2018), while Küchen and Trilla collaborated as part of Barcelona band Phicus' Sumpflegende (Fundacja Słuchaj, 2019). All of which means it is a unit rooted in fertile common ground, cultivated to perfection.

While it is Küchen's outpourings which grab the attention, the tolling interludes for bass and drums hold their own interest. Trilla is one of the most captivating young drummers on the European scene, equally adept at integrating his crisp accents and timbral interrogation into either rubato tapestries or clattery drive. Mazur's attractive woody buzzing growl meshes well with Trilla's percussive thickets, and the swooshes as his fingers graze the fingerboard often merge with Trilla's abrasions, making them less intrusive than is sometimes the case. Together he and Trilla keep matters at a controlled simmer, only occasionally sparking into a roiling boil as on "When Prophecy Fails." Even here, Küchen holds back and the end result is all the more powerful for it.

Other high points include the extemporized threnody between tenor and bass on "Malevolent Ghosts," and a passage showcasing percussion and untethered cymbals from Trilla on the same track. Then, after a cumulative start where tiny gestures vie with silence, the extended "The Flood That Never Came" negotiates an involving trajectory of peaks and troughs. Towards the end Küchen's split tones mingle with metallic scrapes in the sort of combination which invests even the textural exchanges with the emotional weight which characterizes this wonderful set.

The only curiosity is that it's a double album when the playing time would easily fit on a single CD.