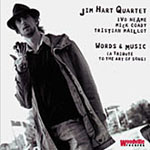 This is the first recording from vibraphonist Jim Hart's Quartet. Subtitled A Tribute to the Art of Song, the album is Hart's attempt to reinterpret some songs by classic songwriters as well as to debut two of his own, and it's a successful attempt.

Despite the title, there are no vocals on any of the nine tracks. Instead, Hart's vibes take on most of the responsibility for the vocal lines, with playing that is extremely melodic and interpretive. His slightly angular take on the vocal line to the opener "It Might As Well Be Spring" shows immediately that he can bring a fresh interpretation to a classic song while remaining sympathetic to the original.

"Just One of Those Things" offers a really interesting take on a classic song. Coming in at just eight-and-a-half minutes, Hart's interpretation opens with a funky introduction, dominated by himself and drummer Tristian Maillot, before all four musicians move into a chorus or two of the melody and go on to a series of looser interpretations in which bassist Mick Coady and pianist Ivo Neame get a chance to stretch out. The original tune is never far below the surface, but each of the players revisits it with lively inventions. Schwartz and Harburg's "I'll Be Tired Of You" is beautifully played; Hart resists the temptation to fill in every beat and his economy is echoed by the other players.

The remaining tracks (including two written by Hart) are less well-known: one, "It Took Me By Surprise." has yet to be recorded as a vocal number; and Antonio Carlos Jobim's beautiful "Piano Na Manguiera."

Hart's other main project, Jim Hart's Gemini, is a freer, less straight-ahead, ensemble whose own debut album Emergence (Loop Records, 2006) is also worth checking out. Hart also works regularly with John Dankworth, Gwilym Simcock, Alan Barnes and others. He is emerging as one of the most versatile players on the jazz scene and this album serves to emphasize that versatility.

It Might as well be Spring; Shulie-A-Bop; Just One of Those Things; I'll be Tired of You; Ladies in Mercedes; It Took Me by Surprise; You Go to My Head; The Cat in the Hat; Piano Na Manguiera.