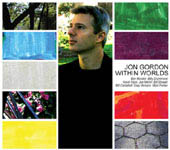 Alto saxophonist Jon Gordon, despite having a discography going back to 1992, remains underappreciated as a leader. Hopefully, Within Worlds will correct that and introduce him to a larger audience.

The album presents Gordon's distinct musical personality and thus has the feel of an integrated work, despite containing sessions ranging from 2002 to 2007. The sessions are not only disparate in time, but in configuration, using familiar players in three different trios and one quintet.

The manifold sounds created by the varying musical forces cuts across the variety of compositional styles, demonstrating Gordon's breadth. He does have something to say musically and gets the most out of the players at hand. His approach is understated and his skill in composing, arranging and playing is hidden under a naturalness that eschews pyrotechnics while emphasizing melody and line.

The music is very personal and there is a sense of portraying a deep appreciation for the joy and wonder of life, not only playing jazz, but also of family, coupled with an awareness of the deep problems our society is facing. To a startling degree, the tracks laid down here make clear that music is both the abstract expression of emotion and direct communication between player and listener. Gordon's music can easily be called intellectually sensuous.

Within Worlds opens with a piece from 2005, "Joe Said So," played by the trio of Gordon, guitarist Ben Monder and drummer Billy Drummond, which, because of the lack of a bottom, has a sparseness about it. However, due to the engaging melodies and Monder's skill in playing three roles more or less simultaneously, the sound quickly feels natural. There are three other pieces by this trio, "Visit," "Notes on Fascism" and "New Eyes" (the last two from the "Suite—Notes on Freedom") that explore darker emotional areas, compared to the optimistic and happy first tune.

The quintet consisting of Gordon, Monder, pianist Kevin Hays, bassist Joe Martin and drummer Bill Stewart contribute three tracks, all from 2002, "Havens," the title tune, and "Witness." Placed after the opening trio tracks, the first two pieces provide a nice contrast with a more complex sound and shifting instrumentation available to the larger group. The very pretty title tune (which has some echoes of David Binney's music) is the longest track, creating a floating, eerily peaceful space.

"Sicily," which follows, is played by the trio of Gordon, organist Gary Versace and drummer Mark Ferber. Once again, the mood shifts, now into a late night, smoke-filled club with Gordon emoting over the slithering organ—very cool and very effective. The mood is maintained and deepened with "Twilight Soul (Outsider)" using the trio of Gordon, Martin and drummer Bill Campbell. Plaintive, but again optimistic, Gordon lays his emotions out in the open.

Within Worlds presents Jon Gordon as very much a modern jazz man who combines a searching intellect with emotion-laden music.