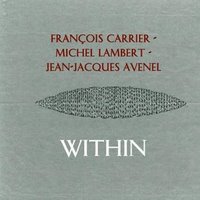 Within opens with François Carrier's alto saxophone played alone. From these very precise, centered, and yet soft-edged notes, the change to the listening space is immediate and complete. The line floats and twists, making feints towards melody, rhythmic regularity and harmony, only to turn away. A seemingly familiar phrase flies by without being developed, but rather is consumed in the ongoing flow of the music.

Such is the impact of this June 24, 2007 live recording from the Calgary Jazz Festival. Joined by his long-time partner, percussionist Michel Lambert and guest bassist Jean-Jacques Avenel, the trio plays music that is the essence of jazz: completely in the moment, with each player listening intently—leading and following simultaneously.

Within is but the latest installment in Carrier's musical journey, documented in a series of live recordings starting with Happening (Leo, 2006) and moving through Open Spaces (Spool, 2006) (with Dewey Redman), Noh (Ayler, 2007) and Kathmandu (FMR, 2008). Each recording is quite different superficially, but they are tied together by Carrier's musical being, as well as that of Lambert, who plays on each. The journey that the albums represent over the past few years is distilled in miniature within each, and has reached a peak on Within.

As he has done in the past, Carrier brought his own recording equipment to capture this performance. The bass on the record is unclear, distant and not separated at times—the microphones were placed a bit too far from Avenel's bass, which was a mediocre one provided by the festival. Despite this minor sonic detail, the music is enormously vibrant and powerful, with Avenel not only fitting in, but playing anything like a guest performer.

"Core," which clocks in at over forty minutes, epitomizes the distinctive characteristic of Carrier's music. This towering experience stops time in its tracks—there is no listening fatigue since the music is constantly changing its emphasis and characteristics. While Lambert and Avenel develop a something of a pulse early on, Carrier flits all around this regularity, for the most part ignoring it despite its insistence.

Avenel and Lambert then play a phenomenal duo section that leads to a different rhythmic pattern which underlies Carrier's return. The intensity continues to rise as all three players, although speaking separately, produce a unified sound. At about the halfway point, the density recedes, and Lambert and Carrier begin a duo, only to be joined by Avenel playing a sanza, which is an African plucked idiophone. Its entirely different sound and repetitive note patterns produce a magical sensation, which is picked up and extended by Lambert and Carrier.

Description does little to convey this music's depth, intensity and sheer joy—it really must be heard. Within is an exquisite document of three players who have entered the zone, and brought the audience along with them.