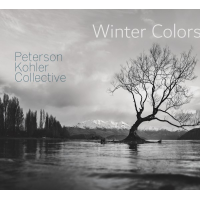 The Peterson-Kohler Collective is a marriage of both familial and Northwestern musicians. John Bishop, drummer and co-founder of Origin Records, unites guitarist Dave Peterson with his cousins, Lee and Rob Kohler, who play piano and bass, respectively. Also joining the group is the versatile saxophonist Brent Jensen. From the sense of isolation evoked by the album's cover to the music contained within, their debut recording is very much an illustrative concept, likely conceived from the sprawling, frigid Montana landscape to which both leading dynasties were born.

It is Peterson's title song, positioned at the onset of Winter Colors, which serves to set the tone for the hour to come. What he has created is a poignant display of accessible impressionism, just experimental enough to enjoy a touch of the avant-garde. As Lee Kohler's left hand drives the heavy mood, his right follows the guitarist's melody, backed by subdued bass, before all three diverge into their own separate, parallel lines. Allowing the piece time to simply unfurl will reveal something the jazz milieu could do with more of; a middle ground at which neither artist nor listener must compromise.

That conviction holds the group to the album's titular theme as it leads them through pieces such as "The Wind Has Gone" and "Graceful," with much of their magic coming from the interplay between Peterson's warm guitar and the crisp, sure notes from the younger Kohler's piano, which carries that theme forward. The former composition in particular contains the most aggressive drum work from Bishop, whose thunderous cymbals manifest as the ubiquitous heavy clouds hovering over the remainder of Winter Colors.

Poised between jam session and elegant expression, the Peterson-Kohler Collective frees themselves from the expectations which come with either of those categories. That creative license comes into effect during "Grey Mist" and "White Flurries," two brief interludes of similar style yet with radically different perspectives.

"Grey Mist" is cautiously chaotic, with Jensen blowing an ominous pall over the quintet's arrangement, while its successor, separated by Peterson's "The Wind Has Gone Down" and Jensen's "Danza," takes an opposing stance. As tranquil a sound as millions of thick snowflakes caressing the frozen ground may be, here the Collective chooses to instead explore the metaphor offered by the quiet furor created as they make their journey downward. Neither of these sub-three minute unstructured explorations would stand on the weight of their own merits, but as supporting pieces they add character to the album overall.

Their ability to knit a unifying idea through multiple sub genres of jazz is what allows the band to shoehorn an old-school tune like "M&M Blues" into the mix without losing sight of the style they developed over the course of Winter Colors. Rob Kohler's bass in particular strums out a deep blues vibe; more than any other, the album's penultimate song belongs to him.

"Solstice Song" serves as a final bookend to Winter Colors; the continuing B-side to its opening title track. The familial connection really comes to a head here, as the band narrows to a trio. If the zenith of art is to evoke emotion, Dave Peterson's ability to compose music which so quickly precipitates mood and atmosphere may reach so high a point. He restrains himself to a modest use of reverb when needed, and his guitar never seems to be at odds with the piano or bass. Whereas its companion piece began the album with enough verve to spark curiosity as to what may follow, "Solstice Song" ties the entire enterprise together; it's really just the perfect denouement to an outstanding inaugural effort.

Winter Colors improves with each successive listen; once acclimated to its unique perspective, the individual efforts of each member of The Peterson-Kohler Collective are more readily caught and appreciated. Enjoying it multiple times doesn't result in a different experience, but it does tighten the mind's perception of this new quintet. While a concept based approach isn't typically a recipe for long term sustenance, the talent and vision this group possesses leads to the hope that Winter Colors receives a follow up effort in its footsteps while they are still fresh.

Winter Colors; I Need You Too; Rise Up; Graceful; Grey Mist; The Wind Has Gone Down; Danza; White Flurries; M&M Blues; Solstice Song.