By Doug Collette
December 11, 2021
Sign in to view read count
Whether or not Neil Young was being ironic or sarcastic in 1979 when he intoned ...'rock and roll can never die...' the descriptive musical term may indeed be outdated after so many years of arbitrary categorizations, hyphenates and glib marketing labels like 'Americana.' Yet that eclectic mix of roots, often referred to as 'mongrel music,' still flourishes within the niche-heavy demographics of our time and for the very reason its three-word name is so apropos: whether the emphasis is on the country, blues or folk elements in a given band's style, the fact is that, at the apogee of its artistry—near which reside the works of Willie Nile, Howlin' Rain and Divine Horsemen—the sound radiates a colorful dynamism. It's not that one genre of music is necessarily better than another, it's just that they're different. 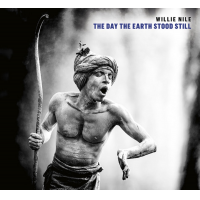 The lockdown that left The Big Apple desolate prompted this titlesong (facetiously utilized from the science fiction film of the same name), a signal reminder how, on his fourteenth studio album, Willie Nile remains open about his influences (most notably, Bruce Springsteen circa The River (Columbia, 1980) )and thus skillfully rises above them (most of the time). His voice is more rather than less his own as it resonates throughout songs such as "The Justice Bell (For John Lewis)," while "Expect Change" will remain timeless in its topicality beyond the pandemic. Likewise, "I Will Stand," "Time to be Great," and "Way of the Heart" might well be sentiments to live by in the new normal, that in addition to functioning as captions for the images on the CD package and twelve-page booklet inside; as with the fervent, stripped-down rock and roll music itself ("Blood On Your Hands" featuring Steve Earle compensates for the overly-clever "Where's There's A Willie There's A Way"), those shots of living statues by Johan Figueroa-González are as evocative as they are graphic, suggesting a durability to this music not readily apparent at the outset of hearing it. 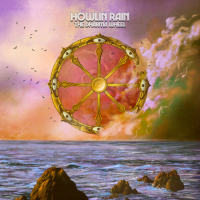 Comprised of a half-dozen tracks ranging from just over six to more than sixteen minutes in duration, Howlin' Rain's ninth recording, The Dharma Wheel, was mixed and mastered by Tim Green (who also did some of the recording). As such, the audio mirrors the colorful, eye-opening cover art by Arik Roper, the penetrating sound of a fluid, streamlined rock that alternately assaults and insinuates, occasionally in quick succession as on "Don't Let The Tears." Meanwhile, the core quartet maintains its fundamental bond as much through the collective composition of the material as nimble instrumental work that also allows the foursome to incorporates distinctive musicianship outside the group: keyboardist Adam MacDougall (Circles Around The Sun, Chris Robinson Brotherhood) and violinist Scarlet Rivera (Bob Dylan's Desire (Columbia, 1976) and the Rolling Thunder Revue). Patient and humble enough to allow the latter to begin this fifty-two minutes, Howlin' Rain may well become as deeply immersed in the experience of playing as listeners will in hearing; still, the intense impact of the sonics compels perusing the printed lyrics to almost invariably discover there's a readily-discernible connection between performance and prose—see the uplifting "Under The Wheels." 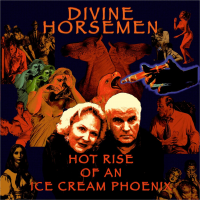 Hot Rise of an Ice Cream Phoenix lends veracity to the modern day truism about long strange trips. The reunion of the eighties post-punker Horsemen was in the work for some years before writing and recording began on a mix of originals by the original front people, Chris D(esjardins) ("Love Cannot Die") and Julie Christensen ("Barefoot in the Streets"). To round out the thirteen tracks, collaborations with new bandmates such as "No Evil Star (Cold and Raw)" reside comfortably next to judiciously-selected outside material, the most significant of which is the tune referenced in the LP's title: much more raw than Jefferson Airplane's rendition, the counterpoint/interplay of the male/female voices, not to mention some healthy and intelligent guitar soloing hearkens directly to the legendary San Francisco band. Still, tracks like "Falling Forward" are dollops of melody in the midst of otherwise edgy but intelligent rock and roll music; as with the album as a whole, produced and mixed by its male co-leader and Craig Parker Adams, it is more polished and technically-advanced all around than it might first seem upon initial listening.

The Day The Earth Stood Still

Tracks: The Day The Earth Stood Still; Sanctuary; Where There's A Willie There's A Way; Blood On Your Hands; The Justice Bell (For John Lewis); Expect Change; I Don't Remember You;