By BRUCE LINDSAY
January 19, 2016
Sign in to view read count 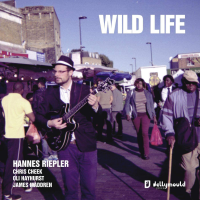 Austrian-born guitarist and composer Hannes Riepler moved to the UK a decade ago, releasing debut album The Brave (Jellymould Jazz) in 2012. Wild Life is his second album: with a new and slightly stripped-down line-up (no keyboards this time around) it's an equally impressive outing.

Most of the tunes are Riepler's originals—there's also experienced saxophonist and new band member Chris Cheek's "Sailing Ships" and a cover of Beck's "Modern Guilt." The tracks are all between four and eight minutes in length, giving the band time to explore the melodies but not so much time that the playing becomes repetitive or loses its way.

"One Shot" sets up the mood for much of the album. The music flows gracefully, as it did on the debut release: there's plenty of forward motion from drummer James Maddren but everything stays under control. There's a calmness about the band's playing, a meditative quality, even at reasonably fast tempos. The sound created by Riepler and Cheek helps to cultivate this mood. Both musicians play with a warm and mellifluous tone: in Riepler's case this applies whether he's playing lead lines or comping under Cheek's solos.

"Gillett Square Blues" may well be a tribute to the London square that's home to the famous Vortex jazz club. It's a lively, positive, tune although Cheek's contribution is a touch less celebratory than the others'—perhaps because he's less familiar with the square than are his fellow musicians. Cheek's own tune, "Sailing Ships," is one of the catchiest and most immediately engaging: "Modern Guilt" has a slightly rockier feel than the rest of the numbers, bringing an engaging jam band feel to the album.

Wild Life is not an album that grabs the listener by the collar first time around. It takes its time, gaining attention over repeated plays as the tunes insinuate themselves into the consciousness—and it's all the better for it.