Julian "Cannonball" Adderley: Why Am I Treated So Bad! 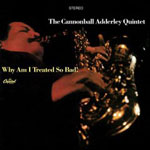 By the time Why Am I Treated So Bad! was recorded over three sessions in March and July 1967, Cannonball Adderley's joyous soul jazz had begun to develop a rictus. Things could still get greasy, but the music was starting to get formulaic around the edges. Mercy, Mercy, Mercy!, recorded by the same lineup in 1966, is arguably the last Adderley album to slow-cook righteously from start to finish. At its best, this recording is almost as good, but there are a few longeurs.

Adderley's arrival at Capitol Records in 1964, after the first flowering of his music at Riverside, teamed him with David Axelrod, a heavy-handed producer, in comparison with Riverside's looser, straight down the line jazzman, Orrin Keepnews. Axelrod was a genius with kitsch rock—check The Electric Prunes' Mass In F Minor—but only tenuously in tune with jazz. (His most successful jazz sesssions, like Harold Land's The Fox, seem basically to work out because he keeps the hell out of the kitchen.)

Why Am I Treated So Bad!, like Mercy, Mercy, Mercy! before it, was produced by Axelrod in front of an invited Los Angeles studio audience, who were encouraged to party and give the atmosphere of a live gig. They all sound like they were having a genuinely good time, as does the Adderley band, at least during the two March sessions which produced the first eight tracks.

Tracks 2-4, recorded at the first session, are soul jazz at its funkiest—so funky, in fact, that not much jazz is left to play around with. But they're great performances, dominated by Joe Zawinul, who makes dirty love to his Fender Rhodes on Curtis Fuller's "What'd I Say"-like opener, "Mini Mama," and then does it all over again on Roebuck Staples' "Watermelon Man"-like "Why Am I Treated So Bad." Yes, indeed.

Tracks 5-8, recorded two weeks later, are more recognisably jazz, though still heavily funkified. Zawinul goes acoustic on all the tunes except "The Scene," but keeps the sanctified lust on mic with two originals, the compelling hard bop piece "One For Newk" and the sweetly romancing "Yvette." Each Adderley brother gives his freshest solo on Nat's "The Other Side."

Zawinul also catches most of the attention on the final two tracks, "Heads Up! Feet Down!" and "The Girl Next Door," though this time it's for what he doesn't do. He sounds curiously unengaged throughout, which may be why neither track has previously been released.

Introduction; Mini Mama; I'm On My Way; Why Am I Treated So Bad; One For Newk; Yvette; The Other Side; The Scene; Heads Up! Feet Down!; The Girl Next Door.

Title: Why Am I Treated So Bad! | Year Released: 2006 | Record Label: Capitol Records