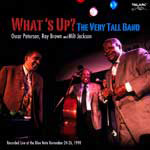 What's Up is the addendum to Telarc's 1999 release of Live at the Blue Note, cataloging a holiday performance of elder statesmen pianist Oscar Peterson, vibraphonist Milt Jackson, and bassist Ray Brown with the support of relative youngster drummer Karriem Riggins. Recorded on Thanksgiving weekend, 1998 at New York City's Blue Note Club, these performances are fortuitous as the three principles have performed together from time to time for the past five decades, building impressive discographies together and separately. Additionally, as these performances were recorded, the sun was setting on the trio, two of whom have since passed away (Milt Jackson in 1999 and Ray Brown in 2002), and the third, Oscar Peterson, is in failing health at eighty-one. While giants still walk among us, they are diminished, diminishing, and not being replaced by comparable talent.

What we have on Live at the Blue Note and What's Up are these masters reuniting to have a bit of fun together, as well as entertain for a receptive audience. In their forties and fifties these septuagenarians were at the top of their game. The present performances are more like a late high school reunion; say the fortieth or fiftieth, where the principles know one another so well they can musically spin a bit of magic on short notice, albeit at a slower pace with attenuated virtuosity. With this level of talent, a loss of technical ability may simply be thought of as a distillation of a lifetime of putting one note after another. Where Peterson, Jackson, and Brown may have displayed a hungry and driven brilliance in their youth, now that genius manifests itself as a comfortable leisurely sort, the unhurried expression of well-lived musical (and otherwise) lives.

Peterson and Jackson prove their inerrant command of the blues on "Ad Lib Blues and "Limehouse Blues. Their ballad supremacy is readily apparent on "If I Should Lose You" and "The More I See You." Ray Brown's ethereal role as the perfect timekeeper is illustrated throughout. Riggins should not be shortchanged in this discussion. His support is tasteful and respectful, much like that of an alter boy serving three archbishops at High Mass. The ritual, the performance contained herein, is important because it is no more. It reminds us of the terrific loss of these artists and offers us the opportunity to be grateful to have had such talent among us.

Squatty Roo; Salt Peanuts; Ad Lib Blues; If I Should Lose You; Limehouse Blues; Soft Winds; The More I See You.