What Happened, Miss Simone?: A Biography

BY NENAD GEORGIEVSKI
March 15, 2016
Sign in to view read count 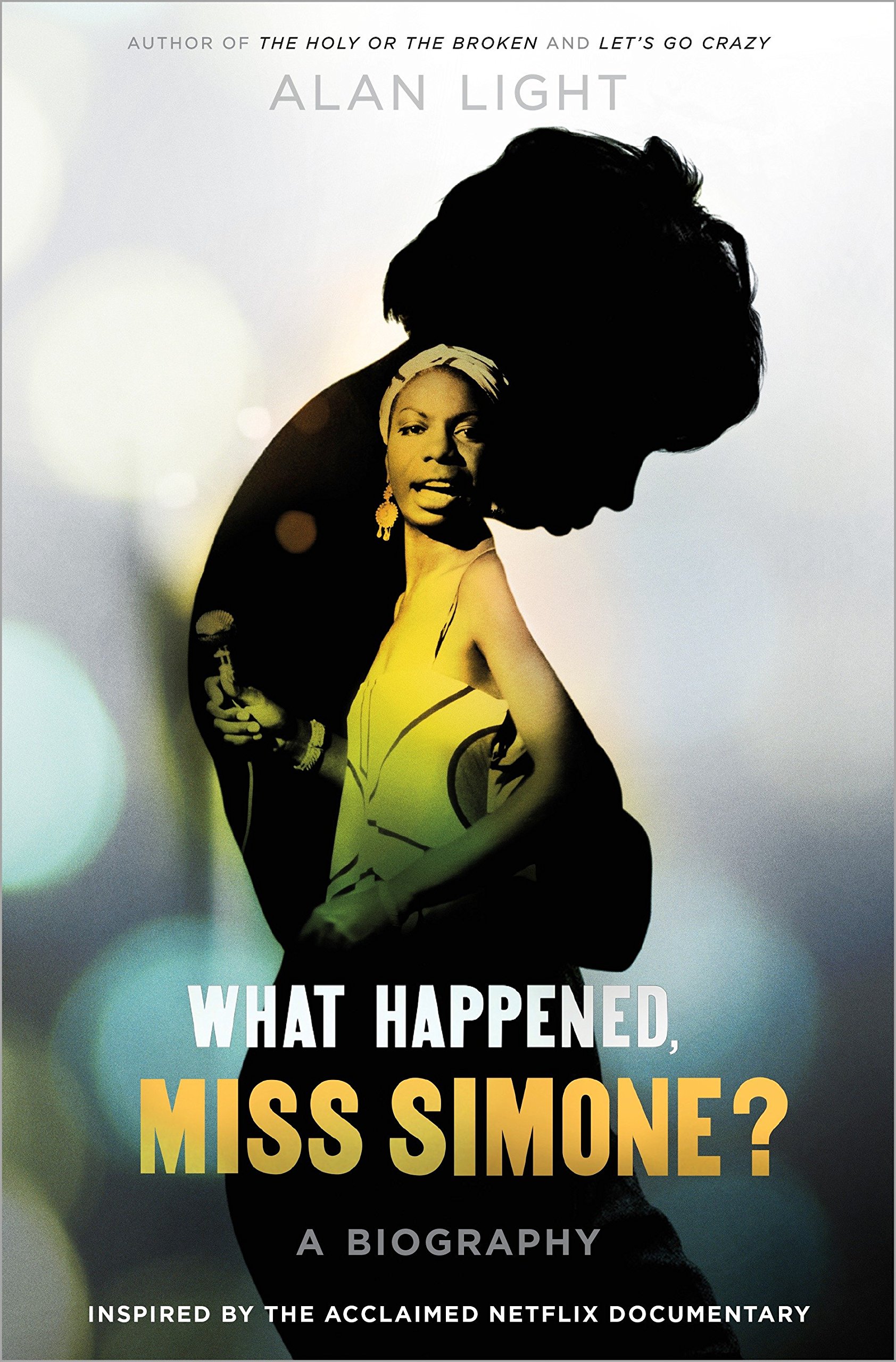 It was singer and poet Gil Scott-Heron who said that Nina Simone was black way before it was fashionable to be black. A controversial and indisputable music icon and celebrity, her unique blend of jazz, pop and soul made her one of the most compelling voices in music history. She was equally known for her interpretations of other people's songs, that encompassed completely different genres, and her original songs that unmistakably had a stamp of her distinct style and character. As a passionate and outspoken supporter of the Civil Rights movement, she used her songs to empower the movement. But these are just fragments of a much complex story that was fully revealed and presented firstly in the documentary film What Happened, Miss Simone? by Liz Garbus and then in writer Alan Light's book with the same title.

Alan Light, a renowned journalist, editor and author of books about singer/poet Leonard Cohen, Prince, and several other titles, has given an in- depth portrait of this one of a kind artist. In just over 320 tautly written pages which are thick with the information gained from an indefatigable research from materials amassed behind the Oscar-nominated documentary What Happened, Miss Simone? he is providing many insightful views about Nina Simone's life. It is a fascinating tale, and Light tells it in an equally fascinating style. He diligently sifts through a myriad of sources such as various interviews with Simone or her closest associates, journalists and cultural commentators, journal entries, articles, and digs deep into the narrative of Simone's life. The narrative arc of her life and career were dramatic and Light maps a life full of artistic achievements, personal peaks and valleys, a career that stumbles and falls.

Born Eunice Wayborn and raised in a small North Carolina town, she never noticed much prejudice when she was growing up there. Some of the town's white citizens have even helped this young talent's musical education. It was there that her first battle against the privileges of white folks happened when at an early recital an anonymous white family sought to force her parents from their front row seats. Still only 11, Eunice spoke up to say she wouldn't perform unless her parents remained in place. The audience laughed and jeered at this reasonable demand. Thus began her miss-education. Her earliest ambition was to become the first black concert pianist, but eventually after a year of scholarship at Julliard, she was turned down by the major colleges. Even Julliard was unpleasant as she found the same racism there as in other establishment outposts. This wasn't some ordinary racism but more of a broader agenda that eventually thwarted her ambitions. The painful rejection proved to be a turning point and as a result she turned to night club performances in a bar in Atlantic City where she incorporated her extraordinary piano technique to performing jazz. That is the moment when she took a stage name, Nina Simone, partially out of fear of her mother who definitely wouldn't have approved her choice of playing the "devil's music."

In the beginning, she would perform works by classical composers such as Bach and Chopin alongside with instrumental selections of gospel songs, but soon she was warned to sing songs if she wanted to keep her job. This led to building up a repertoire and giving electrifying performances. Eventually, this led to a recording contract and soon she released her debut, Little Girl Blue. This wonderful album featured her first hit and trademark song such as Gershwin's "I Love you Porgy." It even featured a song that in later years would bring her back in the limelight, "My Baby Just Cares For Me." One of Simone's strengths was her strong interpretations of other people's songs. Later, when other people covered these songs as well, it was her arrangements and interpretations that they looked up to rather the originals. An example to that were singers David Bowie and Jeff Buckley, to name but a few, who covered songs from her repertoire and using her arrangements.

In the late '50s she relocated to New York City. She had her mind turned and her worst fears articulated by meeting remarkable men and women like Langston Hughes, James Baldwin, Stokely Carmichael and playwright Lorraine Hansberry. It was there and then that she began to see herself as a black person in a country run by white people and as a woman in a world run by men. Her albums always featured a song that reflected her black origins, but by 1963, she was singing loud in support of the Civil Rights movement. Simone was outspoken and in her performances she voiced her opinions for many that didn't. She mourned and rebelled for those four little girls in Alabama blown apart in a church by white "Christians," the assassinations of Malcolm X and Martin Luther King and George Jackson. It was her husband and manager, with whom she had an intense and stormy relationship, that channelled her anger and frustration into music and a result to that was "Mississippi Goddamn," a furious and vitriolic yell that was thrown like a cannonball.

She showed how free she was by performing in Mississippi, defying the death threats that she was receiving on a daily basis. She sang, and the authorities listened. She withheld taxes from her warlike government, and she fought for musician's rights. Eventually, she realized that her fight was difficult and frustrating. Simone began to see even her black audiences as spectres of defeat, sell-out and no future. Songs burned in her throat. As a result, she began a long night of silence (exile) in places like Barbados, Liberia, Switzerland and finally France. She still performed, but ever ahead of her time, people weren't that ready for her schizo-blues.

The book is unstinting in its depiction of the hardships Simone has faced. Throughout, Light's style is eminently readable, but the book is not an easy read, as when Simone begins to slide down, the reader is taken down with her. Her life was full of turmoils, strife, suicide attempts, excessive drinking, financial mismanagement, and ratfink lovers— a receipt for a full catastrophe. She was deeply troubled and very unlucky. Simone's actions put strain to all of her relationships starting from her closest family to associates and people trying to head a helping hand. At moments she was a horror to be around with. It wasn't until the'80s when she was diagnosed as bipolar.

But in the late '80s her career and interest about her were resurrected when a song from her debut "My Baby Just Cares For Me" was featured in a perfume commercial. The song was a huge hit and it exposed her to new audiences. By then, she was only a faded memory of a cult artist who was living her final years in France. There were several attempts to make a comeback, but those were unsuccessful. The song's popularity provided her with steady income until her passing in 2003, regardless the fact that she lost 1 million dollars in royalties due to ill financial decisions from the start of her recording career. Eventually, upon her death her ashes was scattered in several African countries.

When compared to the film, this book delves deeper into Simone's misfortunes and strife. The story of Nina Simone, like all great artists, is distinctive and idiosyncratic. She was a true original both off-mike and off-stage as on. As the book shows, she had a life full of fascinating moments and terrifying endurances and turmoil. She was quoted saying "An artist's duty is to reflect the times we live in," and both the book and the documentary serve as reminders of her enduring legacy and struggle, and how her fight is still relevant today as it was in the '60s.