By KURT GOTTSCHALK
December 18, 2008
Sign in to view read count 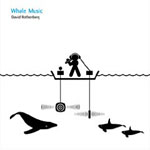 Composer and academe David Rothenberg covered fascinating ground in his 2005 book and CD Why Birds Sing (Terra Nova), examining the functions of bird songs and employing them in his music, recording with a variety of birds around the world. To follow that up, Rothenberg has spent time working with another famed animal singer. Whale Music, a companion CD to his recent book Thousand Mile Song (Basic Books), is a set of clarinet pieces (with some additional instrumentation) set to recordings of whales singing.

He does a commendable job complementing and reinterpreting the whales' songs on his clarinet, duetting primarily with humpbacks and belugas and balancing between imitating their sounds and retaining his own instrumental voice. He wisely does not make this an ambient, new age album, but instead accentuates the musical qualities of the underwater cries, adding occasional guitar, violin or keyboard to make human collaborations. The duets come off as joint improvisations—and in fact some of them are, recorded with microphones and speakers both above and below water so that the whales—intentionally participating or not—could hear and potentially react to the music being made. Others are studio creations, nicely setting the whales into a group construct.

Central to what makes Whale Music work is the fact that Rothenberg approaches each of the 12 tracks as a composer. The pieces vary considerably and, with one exception, work quite well. The disc ends with "The World's Last Whale," an ill-advised spoken piece with a wispy Dylan cadence which is the only thing here that borders on the one-world spirituality the whole project threatens. But it is easily forgiven in the context of an otherwise original and largely successful album.

Valentine's Day 1992; Never Satisfied; The Far Field; Whiteness of the Beast; Duo Orcananda; The Killer; Moby Click; And She Married a Whale; Beluga No Believe in Tears; Koholaa!; The World's Last Whale.