By GLENN ASTARITA
September 29, 2011
Sign in to view read count 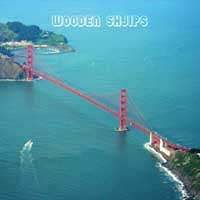 Derived from America's western mythology and romanticism, the San Francisco-based Wooden Shjips incorporates vintage psychedelics, propelled by punchy back-beats amid Sonic Youth-style crunch chords and doses of German space-rock. However, the musicians do seed familiar turf into an identifiable group-focused line of operations. Perhaps a throwback to the '70s, due to Farfisa organ sounds and dreamy electronics and guitars treatments, the band mixes it up with a great deal of improvisation, shaded with ethereal ambience and a haze of semi-controlled gunfire.

"Home" is launched with a classic, distortion-heavy, hard-rock vibe, featuring Ripley Johnson's yearning, but low-key vocals for an overall motif that spawns a combination of steely overtones and otherworldly mosaics. The plot thickens with "Flight," which is designed with wah-wah and psycho guitar parts to complete the moveable wall-of-sound aesthetic, as the artists prod the imagination to wander or flutter into a prismatic abyss.

The album closer "Rising," sparks fond remembrances of the inventive German progressive/space-rock unit Amon Duul, as the band sojourns into the netherworld, with Johnson's rocketing riffs atop a pulsating sequence of grooves via deep space exploration. The band strikes an uncanny equilibrium between eerie, open-ended theme constructions and slamming pulses to delineate a corporeal stance. In a loose sense, they translucently merge a fact and fiction-type scenario that is a component not always attainable within many fantasy-land efforts, evidenced by progressive and/or space-rock outfits hearkening back to the 1970s.