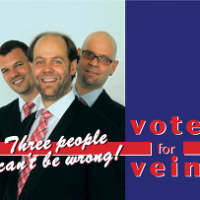 Working in a piano trio these days, it's really quite hard to stand out with so many amazing players in the piano trio biz. Think about it. You have to compete with The Bad Plus, Satoko Fujii, Keith Jarrett, Dawn of Midi, Vijay Iyer, Marcus Roberts, and a zillion other innovative and talented musicians using the exact same instrumentation. Yet, for all of the activity in this particular area there's always a new piano trio on the horizon with something different to say. Myriad3 from Canada is a good example of an utterly distinctive new piano trio. VEIN, from Switzerland, is another. Comprised of twin brothers Florian Arbenz and Michael Arbenz on drums and piano, respectively, plus bassist Thomas Lähns, the trio have musical careers that straddle classical music and avant-leaning modern jazz.

Their music is hyperactive, humorous, and subtle, played with sparkling technique and a unique sort of energy that keeps their complex compositions from sounding sterile. Vote for Vein is peppered with all sorts of little surprises. There are passages of free improvisation, unexpected duet and solo passages, rhythmic modulations so subtle that it takes a moment to realize they've happened, and it's all delivered with a surefooted and forward-leaning swing. They've been around since 2006, and Vote for Vein is their 8th album. Previous recordings include collaborations with heavyweights such as trombonist Glenn Ferris and saxophonist David Liebman, and an interpretation of "Porgy and Bess" (Vein Plays Porgy and Bess, Unit Records, 2011).

"Appearance and Speech" starts the album off with a fusillade of hard- hitting chords, backed by tympani drums, that leads into a sort of fractured, odd-meter stride piano melody. Bass and piano solos lasting maybe 8 or 12 bars protrude from the complex compositional maneuvers long enough to dazzle the listener before the trio returns to the crazy cloth structure. The overall effect is this is a trio of equals, a bit like The Bad Plus, where any one might step up to the foreground at any given time. The writing here certainly permits that, but even at their most conventional-as on the pretty waltz "Dedicated to the Quintessence"-the trio's musical mastery and telepathy is readily apparent.

Michael Arbenz, despite his monster chops, seems to be a somewhat understated, lyrical soloist in the mold of Steve Kuhn or Paul Bley. These tendencies are readily apparent on his rippling, meditative solo feature, "Love The Difference." Brother Florian demonstrates a similarly accomplished technique on the drumkit. He's a happy, busy player whose solos, fills and rhythmic modulations have an innate musicality. He's featured on "A Very Alternative Draft," wherein he seizes upon the piece's mechanistic clockwork feel to introduce a vast, ever-changing array of percussive sounds. Bassist Lähns takes the lead on the up-tempo, minor-key "No Change is Strange," providing some interesting timbral contrast before Michael Arbenz' leaping, bounding solo. Lähns' own composition, "Eat The Rich" is a striking multi-tracked duet between arco & plucked basses. On the more straight-ahead side, "Everything for Everybody!" swings hard and weaves back and forth between dark and light harmonies in an unusual and affecting way. The album closes with "No We Can't—Vote For Us Anyway," an energetic, attention-grabbing flag-waver with an insistent melody and a seemingly endless variety of fascinating variations. Lest anyone think that hyperactive virtuosity is all this band is capable of, "Clear Light" presents the listener with a slowly unfolding sound field of pianissimo bass harmonics, mbira, gongs, and gently reverberant chords from the lowest registers of the piano—sort of like a deconstructed lullabye.

Vote for Vein, indeed. My guess is that the possibilities of the piano trio must truly be endless.

Appearance and Speech; Dedicated to the Quintessence; Toward the End of a Countertrend; No Change is Strange; Clear Light; A Very Alternative Draft; Eat the Rich; Everything for Everybody; Love the Difference; No We Can't – Vote for Us Anyway.