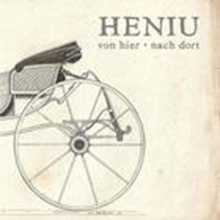 Von Hier Nach Dort is Heniu's debut album; a light, almost ethereal, collection of tunes that draws strongly on jazz but also incorporates influences from folk, classical and ambient genres. The result is a pleasingly fresh and accessible recording, with a positive and unpretentious vibe.

Hans Arnold composed all of the tunes on Von Hier Nach Dort and it's his Wurlitzer piano that provides this Berlin-based trio's unique selling point: a warm, organic sound that falls between the sounds of the acoustic piano and the sharper, electric tones of the Fender Rhodes. Bassist Sebastian Liedke—whose self-produced To Walk In The Past was one of 2010's finest debuts—and drummer Julius Heise are the perfect rhythm section for this lead instrument. They both play with style but with enough control to avoid overwhelming the keyboard's pleasing but rather unassertive tone.

Arnold's tunes are strong on melody: thoughtful, even meditative, compositions with an underlying spirit of optimism and the occasional foray into more up-tempo territory. "A Farewell" and "Retrospect" are two of the prettiest—laidback, relaxed pieces underpinned by Heise's loose brush work. "Warten Auf Schnee;" which Liedke opens with a rich, gently funky bass line has the most insistent groove. There's a hint of melancholy on "Kissenberg," thanks to Liedke's arco bass, but this is balanced out by the uncharacteristic urgency and drive of the opening to "Berlin Phone Call" and the joyous dash of "Kaffee und Kuchen."

The music on Von Hier Nach Dort is gentle, with an almost childlike sense of innocence and fun. Like strawberries, cream and white wine on a warm summer's day, this album is a quiet pleasure that delivers plenty and promises more for the future.