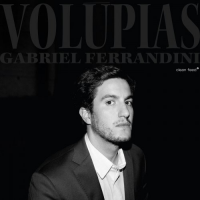 Portuguese American drummer Gabriel Ferrandini's album Volúpias offers fascinating, impressionistic sound-portraits of the streets and avenues of Lisbon. Yet, unlike what one might expect from an ode to the urban experience, Ferrandini's portraits are often sedate and abstract, more a stroll than a view from a passing vehicle window.

These impressions are given form by his two bandmates, bassist Hernâni Faustino and tenor sax wizard José Pedro Sousa. Sousa certainly lays it out on "Rua da Barroca," the longest and most raucous number on the album. His unaccompanied solo, near the beginning of the piece, rips and roars and his lightning quick tonguing and explosive notes are supported by Ferrandini's all over drumming. On other pieces such as "Rua de O Século," Sousa plays long legato notes with clarity even as his breathing gently rattles the reed. Faustino does his part too; bowing, plucking, and rolling along the neck of the bass are all techniques that ground the abstractions. Best of all, there's a gentleness in his tone that lets the earthy wood texture of the bass emerge.

The icing on the cake, though, is Ferrandini himself who, like Ches Smith, Tomas Fujiwara, and Harris Eisenstadt, is becoming a major force on the avant-garde drumming scene. Exhibiting a musical touch and control that accents off-beats or highlights elements of Sousa's solos, Ferrandini shines and surprises. Mallet whooshes on the cymbals, the occasional ping, the slips and slides and bounces over the trap set, all suggest Ferrandini is as much concerned with effect as he is with force. The result is a subtlety rarely exhibited in free playing.

It is to Ferrandini's credit that he does not try to dominate the album. Instead his magic is in supporting the efforts of his bandmates through introspective accompaniment that generally stays beneath the surface and only occasionally rises to the top. Like viewing cloud formations passing beneath a blue sky, the music of Volúpias provides listeners with an imaginative and fluid landscape.