BY NENAD GEORGIEVSKI
December 1, 2009
Sign in to view read count 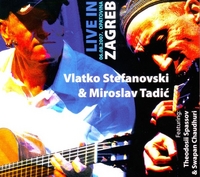 Creativity is something that cannot be forced and the most distinctive and rewarding artistic fellowships are those that follow a natural path to fruition. What brought together guitarists Vlatko Stefanovski and Miroslav Tadic 15 years ago was an act of faith. They were introduced to each other by another musician who was aware of their mutual love for guitars and Macedonian folk music. In the period that followed they went to work on Krushevo (M.A. Recordings 1997), a record that is considered to be seminal and groundbreaking.

Since Krushevo was released, Stefanovski and Tadic have not only made three records together, but they have continued to unite in concert settings, despite the numerous projects they both have in addition to this partnership. Their collaborative project proved to be anything but problematic, instead feeding and nurturing an alchemical connection. The tours that followed have allowed them further to continue to explore the possibilities that have been laid at their feet. Building upon their shared love of bending genres until they break, Stefanovski and Tadic seamlessly blur the lines between traditional folk music, jazz, rock, flamenco and classical. It isn't about where the songs begin but where they end, and that gives the duo its distinct flavor.

In 2005, the duo welcomed a new member, the Bulgarian flautist Teodosii Spasov, adding a new dimension to the music. Live in Zagreb was recorded during a summer tour in Croatia in 2007, when the trio itself expanded into a quartet by introducing the Indian master percussionist Swapan Chaudhuri. The album is a stunning celebration of the project's past, present and future. It sums up the whole trajectory, as it begins with the duo guitars, then the trio is introduced, and finally the quartet is heard.

Starting with "Dafino Vino Crveno," (Dafina with cheeks like red wine), the guitar duo plays with a bright fire that never goes out, even on more laid- back, plaintive numbers such as this one. It seems that the two players are completely engaged in conversation as they magically complete each other's lines. "Izlezi Vido" (Come out Vida, to see a miracle), is a funky folk song with the two guitars setting off into improvisations like twins joined at the hip, something to be expected from virtuosi with such distinguished backgrounds.

"Ej Ti Momche Ohridjanche" (Hey you boy from Ohrid) is an upbeat reel that introduces the trio with Spasov. What is amazing about this trio is that the unit has no single sound identity, though their aesthetic is distinct and readily identifiable. Owing to their long-standing association, the three communicate with heightened perception, anticipating each others' curveballs and responding in kind. When improvising, the trio weaves in and out of meter and harmony, yet always emerges together before the mood shifts anew. The structure of the melody is respected but outside of that it's open season.

For a long time, this project drew associations with guitarist John McLaughlin's Shakti, because of the musicians' virtuoso abilities, improvisational madness and breadth of influences, their folk music associations, and the emotional depth of their style. The introduction of Chaudhuri makes such comparisons more vivid and tangible. Apart from holding a master's degree in music and being conferred honors for his distinguished contributions in the field of tabla by the government of India, and as well as performing with world renowned artists such as sitar maestro Ravi Shankar, Chaudhuri is also a member of the teaching staff at the California Institute of the Arts in California. So is Miroslav Tadic.

On tracks such as "Prosheta Se Jovka Kumanovka," (Yovka from Kumanovo went for a stroll), and especially "Anadolu oyun havasi," which is a 16 minute tour de force, the quartet's seamless interplay is quite remarkable. It delivers consistently inventive music while combining the discipline of classical chamber music with the openness of free improvisation. There is a perfect balance between the two, strung halfway between heaven and earth.

The group's music in general is a milestone in cross-cultural music, fusing Macedonian folk music with various styles including the arcane percussion disciplines of Indian music. This is thoughtful, inspired guitar work woven out of tasteful tones and performed with brilliant virtuosity against a sublime backdrop of percussion and flute. The album is the audio equivalent of pure beauty.

When filming a rock event the emphasis is on the audience, with the people who are watching made to look as though they are part of the whole shebang. When it comes to filming quiet, chamber-like music the emphasis is on the sacredness of the moment. But this music draws from both worlds, as it has the ability to communicate with a large crowd while also possessing the power to communicate directly with each individual in attendance. The concert that was recorded allows the viewer to see how this music is performed. The musicians don't just engage in conversations, and they just don't exchange minor thoughts or ideas—there is a creative outpouring of good music.

The content on the DVD is identical with that on the CD. What you see is what you hear. The DVD lacks any additional material, except for the two brief sections made from still photographs taken during the 2007 tour. It lacks interviews or commentaries, the inclusion of which would have made a better presentation of the group. This doesn't hinder the quality of the performance, but as a first time DVD it would have added provided a better overall feeling to the whole thing.

Anyone who knows the history of this project will love this DVD. It is a guide that reveals how rich the band's inner world can be.