Foghat: Under the Influence 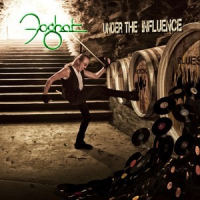 At this point in its history, Foghat's family tree may be approaching the density of the very band from which they originally emerged, Savoy Brown. Although bassist/vocalist Craig MacGregor is a second generation Foghatter, drummer Roger Earl is the only original member of the group still in the lineup that recorded Under the Influence, but as the liner notes state, the spirit of the departed vocalist/guitarist/composer Lonesome Dave Peverett and lead and slide guitarist Rod Price permeates their 'new ' music.

And on the title song, otherwise a somewhat prosaic piece of heavy riff-rock, the presence is almost spooky, at least insofar as bassist Charlie Huhn's voice resembles Foghat's original singer as much as guitarist Bryan Bassett's lead and slide work evokes his predecessor (and Savoy Brown founder/leader Kim Simmonds co-wrote it). The former becomes a bit strident on "Knock It Off," the chord changes of which the quartet renders a bit heavyhandedly, more so than the earlier lineups of were wont to do.

"Ghost' is a more fluent display of stylish musicianship on the part of this personnel, in large measure due to Bassett's slide work riding the rhythm. Interweaving falsetto background vocals around those swooping sounds is one of the more imaginative touches of arranging on Under the Influence the production of which, in fact, is a consistent virtue: recorded in two different studios, the audio quality is resonant and deep throughout, calling for high volume if in fact it didn't boom from the speakers or phones already by dint of Bassett's mastering and even more so Tom Hambridge's work as producer—he's also worked with Lynyrd Skynyrd and George Thorogood.

The former receives co-composing credit on two tunes here, the rest of which are group collaborations that also note writing contributions on the part of Dana Fuchs who wails away, appropriately lustily, on "Honey Do List;" her counterpoint singing on Marvin Gaye's "Heard It Through the Grapevine" has a similar effect, thereby placing this sole cover squarely in the band's wheelhouse.

The current Foghat, including Buddy Guy alumnus/guest Scott Holt, compares favorably with their forbears precisely because they all work together so earnestly; they have the instinct for intangibles, such as the subtle tongue-in-cheek air of "Upside of Lonely" where Simmonds is noted for the third time as one of the writers (for the quick riff at the foundation of the tune?).

The British bluesmeister's presence as a contributor to this project validates its legitimacy even when it becomes bogged down with otherwise generic boogie. But the gleeful vocals, singing electric guitars and earthy rhythmic grind are perfectly suitable to the subject of "Hot Mama," not to mention true to the heritage of Foghat. The inclusion of "Slow Ride" is homage in the extreme though, even if it is the fortieth anniversary of that song's commercial breakthrough and it's rendered here without discernible self-consciousness; it ism nevertheless, the one instance on Under the Influence that seems forced, rather than an honorable, honest homage and legitimate continuation of a legacy.

Under The Influence; Knock It Off; Ghost; She’s Got A Ring In His Nose; Upside Of Lonely; Heard It Through The Grapevine; Made Up My Mind; Hot Mama; Heart Gone Cold; Honey Do List; All Because Of You; Slow Ride.

Title: Under the Influence | Year Released: 2016 | Record Label: Self Produced