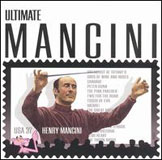 Henry Mancini is without a doubt one of the most prolific and award-winning composers of our time. With Ultimate Mancini Concord Records celebrates "The Year of Mancini by recording a tribute to some of his best-known repertoire. Tributes are a hard nut to crack, as they are usually poorly thought out attempts to make some quick sales. However, Concord enlists Henry Mancini's daughter Monica to not only perform on the recording, but bring loving care and respect to the album. Also evident is the fact that the approach to compiling material and musicians reflects consideration of which artists Henry Mancini would have wanted on the recording date if they were being recorded today. This approach makes for one of the best tribute recordings in recent history.

From the outset, the high quality and "cool" approach of Mancini is laid out on his timeless "The Pink Panther Theme. The ensemble plays it straight and Joey DeFrancesco and Plas Johnson add tone, color and depth. A bit of a more jazz/looser approach is taken with "The Peter Gunn Theme, featuring lead alto saxophone by Tom Scott. But my overall favorite has to be the harmonica of none other than Stevie Wonder on Mancini's moody and placid "Moon River. Add to that the beautiful vocal arrangement and performance of Take 6 and you have one of the best recordings of this classic. The entire piece just inspires the thought that Henry Mancini himself must love the recording.

Recommending a tribute recording is not a common occurrence; however, when one is so well thought out, executed and packaged, it must be recognized. Henry Mancini's career and his contributions to music may take more than the "year" allotted to him, but one of the best places to start would be this recording of a respectful tip of the hat by some of the top musicians, studio professionals and his very talented daughter Monica.