Two trios and a quartet from John Butcher

BY JOHN EYLES
August 16, 2021
Sign in to view read count
Saxophonist John Butcher's impressively large discography features many trio recordings; in fact, trios come a close second to the many duo albums he has recorded. Plenty of Butcher's trio recordings are with groupings that are long-standing, some having acquired names out of necessity, such as The Contest of Pleasures (with Xavier Charles and Axel Dörner) or Common Objects (with Rhodri Davies and Lee Patterson) ), while others have not, such as that with John Edwards and Mark Sanders, or with Gino Robair and Matthew Sperry.

Quartet recordings are far scarcer, some of them having been recorded with pre-existing trios such as Portugal's RED Trio or the Swiss-German Trio Kimmig-Studer- Zimmerlin. These observations were prompted by the release of albums by three new Butcher groupings, two trios and a quartet... 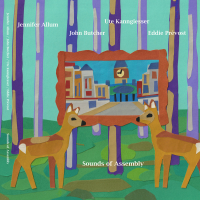 Sounds of Assembly was recorded in April 2013, at Addey & Stanhope School in Deptford, London, the grammar school which Eddie Prévost attended as a child, on a state scholarship. Footage of the recording at the school can be found in a short documentary film entitled Eddie Prevost's Blood, which is on YouTube. It features Prévost with Butcher and two distinguished members of the drummer's improvising workshop, violinist Jennifer Allum and cellist Ute Kanngiesser.

Of course, Butcher and Prévost have history together; the saxophonist played with the Prévost-Tilbury edition of AMM in 2008 and those three recorded Sounding Music (Matchless, 2009) as AMM with Christian Wolff and Kanngieser too. Butcher and Prévost have two duo releases on Matchless and Butcher has been featured on one of that label's "meetings with remarkable saxophonists" series in a trio with Prévost and bassist Guillaume Viltard.

Despite such history, the combination of Butcher and Prévost with the two stringed instruments is an inspired one which breaks new ground for all concerned. Although Allum and Kanngiesser were both classically trained, thanks to their time at Prévost's workshop they are first rate improvisers, neither one displaying any of the rigidity which can sometimes mar the improv playing of classically-trained players. Across five tracks which play for a total of just under forty-nine minutes, all four play together sympathetically, with give and take from all concerned and no-one seeking to hog the limelight. As such this is an album which is a positive addition to the discographies of all four players, one which should be investigated by admirers of any of them; be warned, though, it was released on CD in a limited edition of 300... 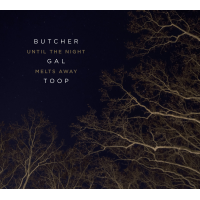 Butcher Gal Toop
Until the Night Melts Away
Shrike Records
2021

Until the Night Melts Away is the debut album on the new London-based Shrike label, which is focussed on free improvisation and experimental music. The lone thirty-six-minute track which comprises the album was recorded live at Café Oto on April 16th 2019, the first time that the trio of John Butcher, Sharon Gal and David Toop had played together. Although the combination of Butcher, Gal and Toop in a trio may not seem immediately obvious to some, each of the three has a history of exploration and inquiry which puts them on a level playing field where they can work together successfully.

The opening of their Oto set was filmed and is on YouTube (see below); it confirms that their controlled, patient attitudes to improvisation and innovation fit together well, with enough mutual understanding and tolerance between them for their contrasting sounds and styles to gel into a coherent whole which never feels dominated by any one of the three. Crucially, the running time feels too short. So, when those thirty- six-minutes are over, some listeners might be left wanting more.... Perhaps that indicates this trio should reconvene and record together again.

Once again, the CD is issued as a limited edition, 500 copies this time.

Phillips, Butcher, Solberg
We met— and then
Relative Pitch
2021

The third grouping, the second trio, finds Butcher in distinguished company, alongside the Norwegian drummer Ståle Liavid Solberg—with whom he first recorded So Beautiful, it starts to rain (Clean Feed, 2016) in August 2015 at Café Oto—and, for the first time, the legendary double bassist Barre Phillips, news which must surely merit a fanfare... Unlike the above recordings, We met—and then was not recorded at one time and place, but comprises three tracks each from November 2018, in concert at Offene Ohren, Munich, and from August 2019, at the Blow Out Festival, Oslo. All of which indicates that this trio may prove to be an ongoing venture—good news in light of this album's music.

The six tracks, totalling fifty-five-minutes, feature four trio pieces—including the two longest, the album's title tracks—one Phillips solo piece and one Butcher-Solberg duo, giving the album variety. With Phillips' long and successful history of recordings as a solo bassist, one wonders if audiences expect a solo piece from him; if so, his feature track, "Traveling," will have more than satisfied such expectations; it will withstand repeat listenings and the test of time. All of which is just as true for the album's other five tracks; even on their first recordings together, this threesome sound as if they had been playing together for years, knowing and understanding each other's instincts and reactions inside out. Truly, these three players seem made for each other. Already this album sounds like a future classic. Surely one of the year's best.

Until the Night Melts Away

Tracks: Until the Night Melts Away