By JOHN EYLES
July 22, 2018
Sign in to view read count
Although the Swiss-born saxophonist, improviser and composer Bertrand Denzler has a modestly-sized discography compared to some saxophonists, the recordings within it reveal a diverse range of collaborations and activities with a consistently-high quality level. For many years he has participated in ensembles such as HUBBUB, The Seen and Trio Sowari, his distinctive saxophone sound being one of the key ingredients of the groups' sounds and successes. But such long-term projects have never prevented Denzler from pursuing a range of short-term or one-off projects alone or with others, with just as much success. The two albums below illustrate such contrasts.... 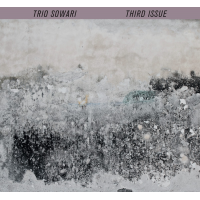 As its title hints, Third Issue follows on from Trio Sowari's two previous albums, 2005's Three Dances and 2008's ShortCut, both released on Potlatch. Despite a label change to Mikrotron, the personnel remains unchanged—Denzler on tenor saxophone, Burkhard Beins on percussion and Phil Durrant on synths—for this album which was studio-recorded in Berlin in July 2016. Although there is a considerable gap since their previous album together, straight from the start the three are right back together. Their music in this trio has always been characterised by their ability to listen to one another, allied to the restraint of their playing, which allows ample space for each of them to play and be heard clearly; they fit together like pieces of a jigsaw. It is also part of the trio's ongoing evolution, as in 2016 Durrant was still using a laptop in addition to modular synthesiser whereas now he no longer does.

Across four tracks, ranging in length from under four minutes to almost fifteen, the energy level and mood vary considerably, giving each piece its own very different character, as reflected in their titles. So, the twelve-minute "Suspension" features a rather sinister modulated drone throughout that would not be out of place on the soundtrack of a low budget slasher movie—maybe a future path for the trio to consider? In contrast, the shortest track, "Exploration," features sounds that could have come from field recordings made in some distant land but were actually played in the studio. Very impressive. 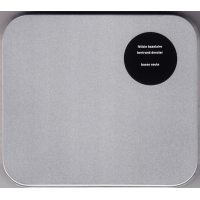 Basse Seule contrasts sharply with Third Issue in several ways. Denzler does not feature at all as a player but is credited as the composer of the album's nine solo bass pieces. In August 2017, those nine were studio-recorded being played by the Paris-based double bassist Félicie Bazelaire, who played cello in the ensemble ONCEIM which recorded Denzler's pseudo-drone piece "Morph" in 2014, the resulting album being released on Confront in 2015. Judging by online footage of Bazelaire in concert, she is as much a performance artist as a cellist or bassist (see footage below and judge for yourself...) Notwithstanding that, she gives a good account of herself as a bassist on these tracks, seven of which are numbered études and the other two compositions.

The album opens well with four consecutive brief (between four and six minutes) études which are all played continuously with the bow, giving them similar drone-like textures, so that they hang together well as a group. Next up, the album's longest track, at fifteen-and-a-half minutes, is also bowed, but has a greater variety of sounds than the preceding four tracks, even including occasional brief silences; although relatively simple, it serves well as a showcase for Bazelaire's playing. The fifth étude, curiously entitled "Étude 3," is not bowed but played pizzicato, allowing a different side of her talent to shine.

The two non-étude compositions are the album's most varied and impressive pieces, each featuring distinctive melodic passages that are striking and memorable; they give Bazelaire opportunities to showcase her skills in different contexts, opportunities which she exploits to the full. Altogether, this album must be deemed a success, with the credit being due equally to Denzler as composer and Bazelaire as performer.