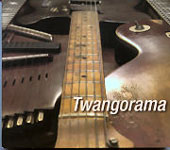 Somewhere on the periphery where progressive rock meets fusion comes this CD that merges the talents of three of the most prolific and versatile guitarists of the New Orleans music scene. It is perhaps a meeting of the minds, a display of mutual respect for four decades of fretboard wizardry, and a callout to the world what New Orleanians have known for years—the talents of Jimmy Robinson, Phil deGruy, and Cranston Clements deserve a larger stage, and this Twangorama coming out party just might be the catalyst in that ascension.

Jimmy Robinson has been the front man for the progressive rock band Woodenhead for more than three decades. The band has hovered in the chasm between critical acclaim and limited commercial success throughout most of that period.

Phil deGruy has garnered both praise and astonishment from elite guitar players for his mastery of his unique "guitarp," a hybrid guitar/harp instrument that adds ten harp-like strings to a seven-string axe. The instrument provides a playground for the harmonics that deGruy has perfected after being influenced early in his career by sporadic study sessions with Lenny Breau.

Rhythm section veterans Paul Clement (bass) and Mark Whitaker (drums) join Robinson in pulling double duty (members of both Twangorama and Woodenhead), making it convenient to allow both bands to occasionally share the same stage by interchanging a few members.

Twangorama is a well-balanced collection of a dozen instrumental tracks, primarily original material crafted individually or collectively by the band's guitar masters. "Mode Rage" is a progressive and eclectic track and a collaborative writing effort by the three lead men. Robinson's "Son of Samba" is one of several tracks that display the Latin influences that have helped shape the band. The Clements-penned "Creature of the House" is a vigorous notation rock number that is perhaps the most mainstream track by the combo. "Sew What" is a playful syncopated number that demonstrates deGruy's penchant for chordal diversity.

Three tracks are dedicated to solo instrumental efforts. Robinson and Clements break out the acoustic guitars for their numbers, ("Big Blue" and "Beck and Call" respectively), while deGruy returns to his mystical seventeen-string guitarp ("Who Can I Turn To/My Romance" medley).

You won't hear a greater demonstration of fret-board supremacy utilizing multiple players than this long-overdue debut recording by Twangorama. Versatility, harmonic mastery, chemistry, and precision are all up for audible consumption.

Robinson, deGruy, and Clements have sharpened their musical skills on a steady diet of working class gigs in pedestrian venues frequented by musical diehards of the Big Easy. With Twangorama, these accomplished and dedicated artists are banking on the idea that synergy is gold. Perhaps this CD will serve as the rainbow that leads Twangorama to that illustrious fortune.

Rat Dust; New Wine; Friday On My Mind; Mode Rage; Sew What; Big Blue; Creature Of The House; Whymn; Who Can I Turn To/My Romance; Son Of Samba; Beck And Call; Other Neighbors.