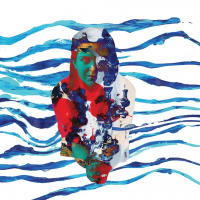 Despite the title of Turbulence, Estonian pianist/composer Kirke Karja and her eponymous quartet carry this vessel of an album through the smoothest of takeoffs and landings. Riding the jet stream of largely original material, it takes full advantage of its wingspan to cross borders.

The title track is a compression of the album's entire trajectory. Opening with a trembling arco bass and Karja's near-plaintive arpeggios, it seems to evoke a wintry starting point with the brushstrokes of a passing artist. But as the guitar of Kalle Pilli makes itself known, intentions vein the sky like leafless branches, crisp and rhizomatic. Karja, meanwhile, intakes a lifetime's worth of wind through her pianistic engine. Bassist Martin-Eero Kõressaar, for his part, navigates buoyancy and melancholy and equal measure. The imagery intensifies in "Tsükkel" (Cycle), which from modal tendrils spins a muted groove. Any excitement born thereof, however, is short-lived and serves to underscore the birdlike shadow cast by its transit. Such contrasts are testimony to a core maturity of exposition and integrity of narrative impulses, as made manifest by Karja's sweeping solo—the poetry to drummer Karl-Juhan Laanesaar's theatrical punctuations.

"Kust tuli öö" (Whence the Night?) and "Orwell" take the band's sound into cinematic directions, working their craft like actors who've internalized their lines to the point of being second nature. In both, Pilli's electricity is a driving force and outlines the album's widest holding patterns. On the more intimate end of the spectrum, "Etude and silent moods" reveals a classical rigor to Karja's approach. The breadth of her playing is astonishing and gives Laanesaar an even larger field in which to reap what she has sewn, including the dreamlike postlude by Estonian composer Eduard Oja (1905-1950). Completing a triangle of overt homages in the program are Bill Frisell's playful yet darkly inflected "Hangdog" and Karlheinz Stockhausen's "Waage (Libra)," taken from the German composer's Tierkreis (1974/75). Built around a 14-note tone row yet given to flights of improvisation, here it evolves from skeleton to photosensitive organism in under six minutes.

With such a range of colors on one palette, it's a wonder they don't muddle together in a sea of grays and browns. Instead, Karja and her fearless musicians keep countless hues intact, so that the listener may determine their relationships to the collective whole. The result is a modern masterpiece worthy of every ear it touches.