By John Eyles
March 8, 2020
Sign in to view read count
Nowadays, Canadian-born-and-educated trumpeter, composer and bandleader Lina Allemano commutes between Toronto and Berlin, as she has flourishing bands in each location. In Toronto, her acoustic Lina Allemano Four released its first album in 2003, on her own Lumo records, and has had a stable line-up of trumpet, alto sax, bass and drums since 2005, which has toured the USA and upped the album count to six; formed in 2013, her electro-acoustic improvising quartet Titanium Riot has released two albums on Lumo and shares its drummer Nick Fraser with the Four, while the other members—bassist Rob Clutton and Ryan Driver on synth—are also in Clutton's band The Cluttertones along with Allemano, the three bands being distinctively different musically.

In Berlin, as well as being a member of the Satoko Fujii Orchestra Berlin, Allemano leads the improvising trio OHRENSCHMAUS which has just released its first album on Lumo. In addition, she has just released her first solo album, also on the label, with a further release promised soon by Bloop, a duo she shares with Mike Smith on live processing and effects. All things considered, it is safe to say that Allemano has come along very nicely since Downbeat named her as one of its "25 Trumpeters for the Future" back in 2007. 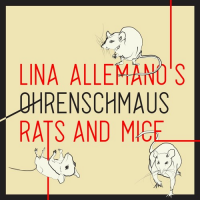 In the trio OHRENSCHMAUS, Allemano is joined by Norwegian bass guitarist Dan Peter Sundland and German drummer Michael Griener. She is credited as composer of the seven tracks on Rats and Mice, which were recorded live at Berlin's Zentri-Fuge on May 9th 2019; the YouTube clip below shows an actual recording session and gives a taste of the music. The tracks are all relatively short, in the range from just over four minutes to just over seven, totalling under forty minutes.
Straight from the start of the opening track, "Year of the Eye," the contrast between this trio and Allemano's Toronto Four is all too obvious; although boundaries can be blurry, this music feels far more like European improvised music than jazz. Some tunes are more composed, while others are more sketch-like. At the recording, all three players refer to the sheet music in front of them but the music seems to act more as a guide than a straitjacket. As Allemano herself says, "There are equal amounts of notation and improvisation, as improvisations are always based on the written material and conceptual ideas. We try to play the composed material in such a way that it blurs into the improvisations...so it's great if you can't tell the difference! Then we did our jobs."

As in any good improvising group, particularly a trio, the music is an ongoing three-way conversation of equals, involving everyone throughout. So, the bass and drums do not adopt the role of a conventional rhythm section and support the leader, instead being active contributors to the creative process, listening and responding throughout. The end results make riveting listening. 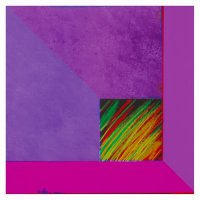 Although Allemano had been threatening to record a solo album for some time, the impetus to finally do so was provided by the sudden, untimely death of her friend and collaborator, the renowned guitarist and pianist Justin Haynes, in March 2019, at the age of 46. Allemano says that the process of composing, conceptualizing, and recording the music for this album in the period following his death gave her something concrete to focus on and was a kind of therapeutic journey. She dedicated this solo project to Justin Haynes' memory.

The album's six tracks were all recorded acoustically, without electronics, effects or overdubs. Across the six, which last thirty-six minutes in total, Allemano takes the opportunity to display the full range of her talent. She says in her sleeve notes, "For me, playing music with other people is often a very joyful experience. Playing solo trumpet, however, is not only excruciatingly challenging in various ways, but it can also be incredibly humbling." In this instance, though, there is plenty of evidence of the challenges but none that should be considered in any way humbling.

On "Clamour," Allemano makes extensive use of circular breathing to sustain a note for an eye-watering four minutes, modulating between pitches and textures to produce music which is varied, not just a technical display or party trick. On "Shimmer," she employs an old biscuit tin as a home-made resonating device, producing sounds which live up to the track's title. The album's title track has Allemano playing trumpet with her right hand while manipulating various materials with her left; again, the results show this is no party trick but a serious extension of her impressive range. "Buchfink" is a delightful melodic piece played with mute throughout.

The album is bookended by two tracks, each lasting about eight minutes and each with a dedicatee, "Portrait of Sticks (for Nick)" and "One Man Down (for Justin)"; they are both played straight, with Allemano freely soloing without noticeably falling back on any of the tricks or stock phrases employed by some players; in two bravura displays, she demonstrates exquisite control of breath, timbre and expression; a most poignant moment comes right at the end of "One Man Down" when, after an earlier emotion-laden passage of coarse, breathy playing, she abandons trumpet and whistles a simple, stark melody, presumably in memory of Haynes, to close the album. Surely, it will not be too long before Allemano regularly features high up in other lists, in Downbeat, All About Jazz and elsewhere...

Tracks: Portrait of Sticks (for Nick); Clamour; Shimmer; Glimmer Glammer; Buchfink; One Man Down (for Justin).