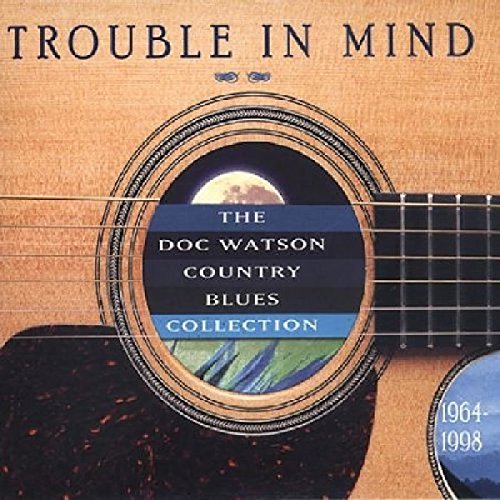 Culled from ten Vanguard and Sugar Hill recordings, Trouble in Mind is an exquisite assemblage of white rural blues by its greatest living practitioner, Arthel "Doc" Watson, the now 80-year-old flat picking savant from Deep Gap, North Carolina. Watson exists today as the only extant proponent of that link between African-American and Caucasian rural music. He is equal parts John Hurt and Jimmie Rogers, Blind Blake and Merle Travis. Doc Watson is like Ray Charles in the respect that neither is restricted by genre designations. They will play whatever they damn well please and will play better than most everyone else. That makes them American Treasures, as I have been trying to tell you, gentle reader, all along.

The majority of these cuts have Merle Watson playing first and second fiddle. Profoundly influenced by John Hurt as well as Duane Allman, Merle Watson proved himself a formidable blues expert. The support he provides his father on "Spike Driver Blues" and "Never No More Blues" is important and exceptional. He learned his father’s craft well and carried it further than his father before his death in 1985. The majority of tunes here fall in the public domain, those that are not belong to the great Jimmie Roger. That is about as close to the source as Moses got.

is an important recapitulation of the art of Doc Watson. Should you desire more, I recommend the Flying Fish recording Pickin’ the Blues.