BY ANYA WASSENBERG
June 2, 2019
Sign in to view read count 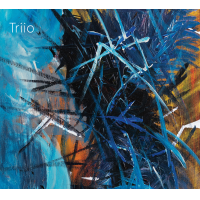 Blending composition and free improvisation on their eponymous release, Triio—a sextet led by Toronto-based double bassist/composer Alex Fournier—offer a distinctive sound, whimsical track titles, and a surprise around every corner.

"ESD" is a vibrant track that opens with a trippy piano line which uses the darker tones of the lower octaves to moody effect. When the rest of the sextet join in, they weave into a complex mesh of sound. There's a nice sense of momentum through the chaos—just when you get used to the groove, it turns into something new.

In "Giant-Dad," Fournier begins with an unassuming bass pattern, soon overlaid with the flute in a kind of counterpoint, then a splash of dissonant piano. It is part classic lounge jazz, with an avant-garde approach to percussion breaking apart the melody for improv sections.

"Fourhundred Dollars" leans in towards the avant-garde and improvisational in flavor overall, with complementary melodic lines that weave in and out of each other. The percussion is constantly moving, a band of chaotic dissonance underneath the mesmerizing repetitive patterns. Each instrument gets a chance to showcase both melodic and improvisational chops.

"Noisemaker" is, not surprisingly, the jumpiest composition. Here, it is the percussion that is the one constant thread, providing the movement while the other instruments work their way in and out of the piece. It vacillates between a steady big band-esque beat and a shimmering cascade of rhythm and noise. In contrast, "Dusk" is the subtlest of the compositions, a minimalist soundscape of moody tones and spare rhythm.

"Permanently Hiccups" has a fanciful kind of flair, using shimmering tones for an ethereal effect, like a classic jazz track played underwater with what the liner notes refer to as a "prepared" piano. There is a sense of invention, but it never subsumes the musicality.

Collaborators are crucial in a release like this which depends on improvisation, including Mark Ballyk's stellar work on drums and percussion, solid team players Ashley Urquhart on piano and Tom Fleming on guitar, and intriguing work from Bea Labikova on sax and flute, and Aidan Sibley on trombone.

The release as a whole exhibits a fresh sense of invention that doesn't abandon its listeners in overly intellectual sonic musings. It is appealing music for those who want to step beyond the usual confines of contemporary popular jazz into musical freedom, without leaving its listeners behind in an obtuse haze.