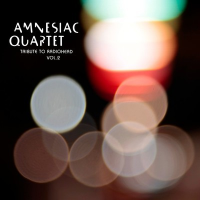 Anyone who has listened to the sound of Radiohead would confess that the English rock band breaks out of the ordinary. Devoid of harmonic complexity, dissonance, or technical virtuosity that would qualify Radiohead's music as highly sophisticated, the sound is nevertheless quite unique and pregnant with deep melancholic emotions that lead vocalist Thom Yorke asserts well in spiraling solos. His vocal performances, as often ascending inflections, produce a spacious and enveloping headphone-friendly sensation.

It would definitely take a lot of imagination to transform such music into jazz. Some sort of interpretation is needed to fill the gap of Yorke's voice creating a sensation of falling into the abyss, while the ascending hard rock texture travels into the middle of nowhere.

Akin to Radiohead's music, the album is divided into two musical genres: slow, rhythmic ballads ("Exit Music (for a film)," 'The Tourist,"and "The Pyramid Song"), as well as frenetic tunes ("Bloom," "Bodysnatchers," "Climbing Up the Walls," and, to some extent, "Knives Out"). Amnesiac Quartet's slick and brilliant rendition of ballads engenders the suggestion that these songs have always been jazz standards. With hardly any synthetic touch, the mood is kept intact through Paindestre's smooth keyboard work, Fabrice Theuillon's endearing saxophone (replacing both the timbre and inflection of Yorke's voice) and double bassist Joachim Govin, whose interruptions represent the rhythmic bebop leap.

The more frenetic rock tunes are prominently bass and drums-oriented, emphasizing Theuillon's saxophone solos. On the other hand, Paindestre's spiraling keyboard sound recalls Yorke's mysterious vocal solos. The quartet does not stick to a close rendering of the original sound but creates space in which to jam. A notable example is "Bodysnatchers," which leaps into a two-minute jam similar to live performances, recreating the song's overall boisterous mood.

Paying homage to a certain type of rock within a jazz framework is made smooth by Amnesiac Quartet, which succeeds in conveying the numerous fathomless feelings that can be experienced while listening to Radiohead.

Bloom; Bodysnatchers; Exit Music (For a film); Climbing Up the Walls; Knives Out; The Tourist; Pyramid Song.