By Nenad Georgievski
November 26, 2004
Sign in to view read count 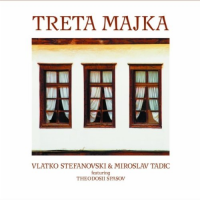 In Macedonian, "Treta Majka" ("Third Mother") is actually a quirky slang expression that means a third attempt or third take. Also, it marks the third album that is an outcome of a fruitful partnership between the Macedonian guitar virtuoso Vlatko Stefanovski and the American-Serbian guitar master Miroslav Tadic that started seven years ago with the now-classical masterpiece Krushevo. Krushevo was a collection of traditional Macedonian reels, tunes and dances played on two acoustic guitars, usually in an odd-meter rhythms and archaic scale structures. The success of Krushevo broke new ground for them, as they were able to perform this music in various parts of the world. The second album was a live performance of the album, titled Live in Belgrade, where Krushevo was taken to a different plain, portraying the way the material has advanced and matured through its many reincarnations in auditoriums worldwide.

Because of its strategic position within the Balkans region, Macedonia represents a real melting pot of various musical and cultural traditions and heritages that has been brewing for centuries. Firstly, there is a strong influence by the Ottoman Empire that had highly developed classical music within the so-called Maqam system i.e. a modal system. Other influences range from Turkish folk music, as well as the travelling gypsy musicians who moved from India to the west picking up every style they came across on their journey, while infusing them with their own sensibility and morphing them into their own musical Esperanto. Another important influence is the Secular Byzantine music, with its intricate tonal structure and rich tradition. All of those strands of influence were weaved through the loom of Macedonian history, which even though full of hardship, tragedy, struggles, produced a musical tradition which is at same time sombre, epical, unrelenting, poignant, yet ultimately life affirming. This is best embodied and echoed in one of its most important features, the odd meters which are prevalent in Macedonian music as the most popular songs are written in seven, nine, eleven and thirteen beats.

Treta Majka finds these two artists working again with traditional Macedonian music and even though with different backgrounds and different approach to guitar playing, it is actually the chemistry that makes their approach to this material unique. The technique of these players is impeccable and their musical sensibilities have been informed by many different styles of playing: classical, flamenco, jazz, rock among others and the music has benefited from that. Compared to Krushevo the ambience is similar, but somewhat less electrifying.

The first track is "Sanoc Sedam Treno" (While I Stayed Up Through the Night, Treno) a plaintive song that opens quietly where we find the two guitars playing with each other not overshadowing or dominating each other. These musicians tend to be "chops-heavy" and virtuosic on their own projects, but here, most of the time the mood is low key as they confidently embrace a simpler, more melodic and atmospheric guitar style, sound and performance.

"Ne si go prodavaj Koljo Ciflikot" (Do Not Sell Your Land, Kolyo) is a popular upbeat folk song that has previously been covered by Vlatko Stefanovski (with his rock Trio). There is a wonderful solo by guest Teodosii Spasov on Bulgarian kaval (wooden flute). Teodosii also plays on several tracks and contrary to what he usually plays (free-folk jazz), he is delivering interesting solos that playfully enrich the music. He also suggested that the duo cover a traditional Turkish tune "Anadolu oyun havasi" that is one of the funkiest (and most surprising) tracks on this record with its catchy melodies and unusual twist and turns.

"Kasapsko Oro" (Butcher's Dance) is a folk dance with an interesting funky melody and the musicians, joined by Teodosii, are really ripping it up by playing flashy solos. "Opa -Iha" is another dance where the music builds slowly to a stormy middle section and then ending peacefully. "Kalesh Angjo" and the closing track "Eleno Mome" are slow ballads that belong to the so-called old town music tradition, a popular urban music from the turn of the 20th century and it shows the variety of traditions and styles present on this album.

This record as well as the previous ones displays the full array and versatility of the performers' craft. These tracks show both the players' ability to blend and to swing soulfully, whether doing a solo, playing in the background or playing in unison. This is rich, sombre, wonderful music being played beautifully by musicians who are pouring their heart into it. What matters here is the union between player and music. This music or its stylistic and performative traits bear some resemblance to the collaboration between McLaughlin and Paco De Lucia, or the music of Ry Cooder, but such comparisons only serve to suggest the level of Stefanovski and Tadic play, as well as the depths of the traditional Macedonian music they so devotedly explore.