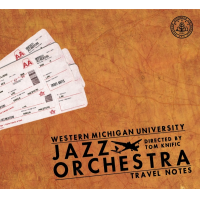 Travel Notes, the seventh album by the Western Michigan University Jazz Orchestra, is much like the first half-dozen: big-band jazz whose design and performance are as consistently strong and artistic as one can envision at any level. Tom Knific, WMU's director of Jazz Studies since 2000, has a keen ear for engaging songs, one of which is his own sunny composition, "That Day in May," sandwiched nicely between a pair of themes by bassist John Clayton— the tasteful, well-grooved opener, "Blues for Stephanie," and robust, gospel-flavored "Reverence."

Even so, it is the orchestra as a whole that carries the day, showing why it is a three-time winner as Best Big Band in DownBeat magazine's annual student music competition and has earned twenty-five consecutive Outstanding Big Band awards at the Notre Dame Intercollegiate Jazz Festival. Brass and reeds are remarkably tight and perceptive, while the rhythm section never misses a beat. If, as some say, it is the ballads that separate the winners from the also-rans, "Passing Giants" shows clearly why WMU is at the head of its class.

From start to finish, Travel Notes is an explicit model of superior big-band jazz. If there is a downside, it lies in the album's modest forty-five minute playing time. Aside from that, there's nothing to reprove.