By MACKENZIE HORNE
September 5, 2019
Sign in to view read count 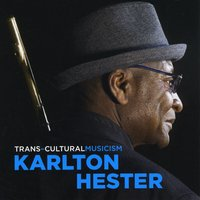 Multi-instrumentalist Karlton E Hester creates an exploratory spacescape with his 2015 release Trans-Cultural Musicism. Alternating between dark and light, angst and release, ancient and modern, earthbound and extra-terrestrial, Hester transports listeners to a Stanley Kubrick-esque world molded by Hesterian Musicism, a talented ensemble of high-caliber musicians from around the globe.

Trans-Cultural Musiciam is a creation that designed to take on new meaning as listeners mature in their relationships with the physical and spiritual worlds around them. By Hester's own admission, understanding the settings and systems that surround us is one that is developed over the course of a lifetime and becomes more sophisticated should one devote the appropriate energies to the process.

This record is a glowing example of modern improvisation. Though the compositions are spontaneous in that there was little discussion regarding the direction of the pieces prior to recording, there is structure to the record. It moves in a zigzag with pinnacles and pitfalls. At the many peaks, Hester and Hesterian Musicism craft narratives using heavy electronic elements, giving the pieces an alien sound. At the nadir, the group enters a place akin to a lucid dream state where more traditional world musics serve as the soundtrack.

There is a clear alternation between science and mythology; tracks like "Quantum Microtubule" and "Quantum Portal" are juxtaposed against compositions such as "Osiris & His 40 Judges" and "Journey Into the Underworld." Upon initial observation, it may seem as if Hester is attempting to juxtapose two opposing concepts. When taken as a whole however, Hester illustrates that perhaps these ideas are more similar than different, revealing a scientific backbone that is deeply hidden within humankind's most propagated legends.

Hester utilizes a number of elements to build and release tension as a storytelling mechanism, including I-Wen Wang's Glenn Gould-like touch on "Dream Sequence," the human voice, and shocking synth lines. All of these tools are being used to build up to something; by the time the album comes to a close with "The First Wormhole," Hester has begun to reconcile the dichotomies established over the course of the record. The final track is built by a nuanced combination of electronic sounds and world music.