By Nenad Georgievski
December 24, 2006
Sign in to view read count 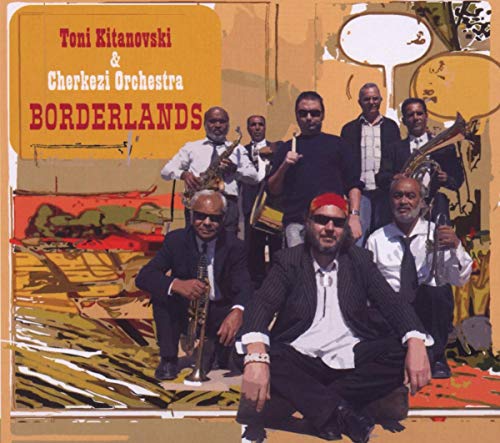 On Borderlands, a collaboration between acclaimed Gypsy band Cherkezi Orchestra and jazz guitarist Toni Kitanovski, both guitarist and orchestra broaden their musical horizons. Much more than another carpet-bagging collection of stray Gypsy tunes or recycled-to-death Gypsy brass band music, the album is a focused and adventurous affair that finds all concerned stretching in new directions. The result is a highly rhythmic, generally explosive blend out of which individual instruments, like Cherkez Rashid's lush and soulful trumpet, emerge to fly as if on a sturdy magic carpet.

The album's title, taken from a poem by Gloria Anzaldua, is used to herald cross-cultural music, neither pure jazz nor pure Gypsy but something in between. The melange is built around inclusivity and collaboration. Kitanovski recalls in the liner notes how he first heard Cherkezi playing at a party, and how their music instantly evoked in him flashes of Sun Ra's Arkestra, Duke Ellington's Orchestra and John Coltrane's Quartet. This anectode alone is promise enough that the collaboration between Cerkezi and Kitanovski will be a generally explosive affair.

The album opens with a tribute track to one of the greatest of all drummers, "Ed Blackwell, an original composition by Kitanovski. After a few seconds of straight-ahead guitar riffs and danceable drums, the Cherkezi can be heard with their instruments pumping behind the jazz band. The track joins together two distinctive and rich musical cultures, which have much in common. Historically, both jazz and Gypsy brass bands have roots in military marching bands. The first military orchestras in the world are said to have been Turkish ones composed entirely of Gypsy musicians. They brought all kinds of songs and dances to the Balkans (as well as to other places the Ottoman Turks conquered). Meanwhile, some of jazz's roots come from New Orleans' marching bands. Many of the earliest jazz musicians learned to play and read music in those bands and their playing influenced some of jazz's immediate forerunners, like ragtime.

Most of the time, Kitanovski acts as artistic director. As a guitarist he has a fine technique, but he avoids overwhelming listeners with it, and shows more restraint than on some of his previous outings. On those tracks which are fundamentally Cherkezi territory—like the traditional reels "Tetovska, "Turkish Chochek, "Christening Dance, "Mr. Neat, and "Mr. Choon —he favours subtle riffs and minimal solos. But throughout the album, he and all the other players brim with life and passion.

Borderlands' standout track is the elegiac—and gloriously unexpected—reading of Erik Satie's "Gnossienne No. 1. Gypsy bands, regardless of the region they come from, have a brilliant talent for absorbing all manner of tunes and re-expressing them through their own vocabulary. Here Satie's melody is refashioned to fit the setting perfectly. (When Satie worked on the Gnossienne compositions, incidentally, he found some of his inspiration in Romanian folk music). A second version of the tune, the rollercoaster "Gnossienne Cocek, is also included.

The album closes with Kitanovski's tribute, "New Orleans (The Never Ending Story) , on which he celebrates rhythms from New Orleans to Topaana. It swings with a New Orleans melody but with danceble Gypsy rhythms. From start to finish this music celebrates rhythm, in particular, as Kitanovski notes in the liner notes, the clave rhythm which in various ways, circumstances, forms and modifications has found its way from West Africa to both North and South America and through North Africa and Middle East to Turkey and eventually the Balkans. This shows that music knows no borders nor boundaries.

Fans of both jazz and Gypsy music, two folk traditions which embrace pain, joy and spirituality, are likely to be moved by Borderlands. It's a hugely appealing recording, by accomplished musicians, and its unflagging melodicism, driving percussion and improvising risk-taking make for a deep and wonderful listening experience.