BY DAN BILAWSKY
December 9, 2019
Sign in to view read count 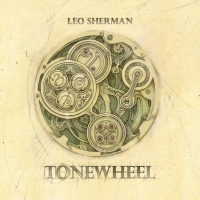 Bassist Leo Sherman knows a thing or two about turns in tone connected to life, time, language and music. Born in Russia, in a repressive, antisemitic atmosphere that eventually drove his family from their homeland, he overcame several layers of adversity some 5,000 miles away, where he was raised in Baltimore, Maryland. There, he became fluent in English and Spanish, developed a passion for music, flirted with a career in globalism, and eventually channeled his efforts into a life in jazz. Now based in New York, and carving out his place on the scene, Sherman is sharing his experiences—personal challenges, cultural fluidity and flexibility, a broad understanding of different worldviews, a musical voice informed by a rich and diverse color scheme—on this, his debut release.

Tapping into biographical veins and broader themes, Sherman creates a blended sound that embraces diversity in every sense of the word. With "In Flight," optimism is held aloft as a virtue while well-wrought lines dovetail and thread through one another. Masterful solo statements from the likes of guitarist Alex Goodman and tenor saxophonist Paul Jones, mirroring the mood at hand, ride the friendly skies. Then weight and reflection seek balance as defining forces during "The Eclipse," a number foregrounding Sherman and Goodman in opposing realms. And following that vacillating vision, a refined doorway into "The Spice Planet" leads to the buoyant body of the song that supports standout work from pianist Ben Winkelman and Jones.

Trimming things down from a quintet to a trio for two tracks, the bassist uses the center of the album to condense his sound, though not his vision. "Nocturne," the first of that pair, swirls and sways in the evening air, with Winkelman, Sherman and drummer Dan Pugach embracing a kaleidoscopic unity during a walk among the constellations. "Holdover," with both swinging ambition and punctuated precision, works a more fiery angle. Together, these two tracks represent a beautiful yin and yang that actually permeates the entire program.

The reformation of the quintet, which coincides with the multi-toned "Chagall," shapes the remainder of the album. These five soothe, exploring nostalgia's tender grasp in "Looking Back Again"; then they sire suggestions of uncertainty and danger at the Jones-driven core of an otherwise hopeful take on murdered Chilean polymath Victor Jara's "Aquí Me Quedo"; and finally they dance around the title track, driving the gears and drawing from a colorful harmonic palette while presenting a fitting close to this emotional journey. One of the more notable debuts of 2019, Tonewheel is a reflection of an artist as grounded as he is open and as inventive as they come.