BY MARK SULLIVAN
November 25, 2018
Sign in to view read count
Thumbscrew is an occasional project for three very busy contemporary jazz musicians. Guitarist Mary Halvorson, double bassist Michael Formanek and drummer Tomas Fujiwara have crossed paths numerous times on their own projects. All three of them participated in Michael Formanek's Ensemble Kolossus: The Distance (ECM, 2016), on Tomas Fujiwara & The Hook Up: After All Is Said (482 Music, 2015), and more recently on Mary Halvorson's Code Girl (Firehouse 12 Records, 2018).

The trio's recorded debut was Thumbscrew (Cuneiform Records, 2014), followed by Convallaria (Cuneiform Records, 2016). This pair of simultaneous releases are their third and fourth albums. The music on both albums was developed and recorded during a residency at City of Asylum in Pittsburgh, Pennsylvania in June 2017. As the titles imply, "Ours" is devoted to compositions by the group members, while "Theirs" is a program of covers from a diverse group of outside composers. The fact that the two albums sound like two sides of the same coin is a testament to the strength of the group chemistry and the identity they have formed together. 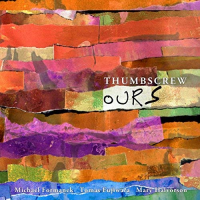 The originals are equally distributed, with three each from all of the trio members. Halvorson gets the first word with opener "Snarling Joys," a twisting line laid over a busy chromatic bass line. The busy guitar solo takes off from the form, giving way to a thoughtful double bass solo. Fujiwara's "Saturn Way" is next, another rhythmic workout with tom tom and bass patterns until stopping for an atmospheric free section.

Formanek's "Cruel Heartless Bastards" has a very distinctive, unsettling head (driven by his bass) which keeps changing tempo. That unsettled feeling continues through the solos, with Fujiwara accompanied by the bass, followed by Halvorson's electronic outburst. The theme finally appears at the end, just about the time the listener might be wondering where the piece could go next. 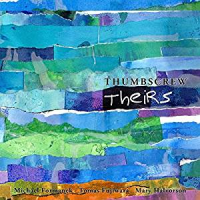 When the group decided to try cover versions everyone brought in music for consideration. In the end they worked on about half of the suggestions. It is an eclectic mix, perhaps most notable for the absence of obvious stylistic precursors such as Ornette Coleman, Carla Bley or Thelonious Monk. There is a generous helping of bebop, beginning with opener "Stablemates" by Benny Golson. Halvorson embellishes the head with pitch-bending flourishes. Herbie Nichols' "House Party Starting" also stays pretty straight ahead and swinging, with an especially fine feature for the bass and drums.

The standard "East of the Sun" is played at a dash, jumping off into free territory almost before the playing of the head is finished. "Scarlet Ribbons (For Her Hair)" is based on the great jazz guitarist Johnny Smith's arrangement, and Halvorson's beautiful playing amply demonstrates her connection to that tradition, while still sounding like herself.

The two South American entries are a bit off the beaten path. "Benzinho" by Brazilian Jacob Do Bandolim receives a sprightly, playful reading that shows a side of the trio not heard on the originals album. "Buen Amigo" by Argentinian Julio De Caro finds the band in a tango mood. They play the tune straight, and go into a conversational exchange that never loses the groove.

Modern jazz was saved for last, beginning with "Dance Cadaverous" from saxophonist/composer Wayne Shorter's Speak No Evil (Blue Note, 1965). One of Shorter's most beautiful compositions, played here initially in a contemplative rubato, then building to an intense climax—the biggest departure from the original arrangement here. Stanley Cowell's "Effi" has an especially memorable theme, which the trio weaves through the entire performance. Dutch avant-gardist Misha Mengelberg's "Weer is een dag voorbij" provides a surprisingly gentle conclusion with its almost folkloric theme.