Alex García’s AfroMantra: This Side of Mestizaje

By ROGER FARBEY
December 22, 2014
Sign in to view read count 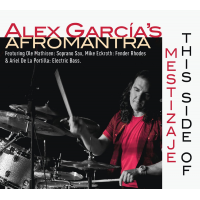 From the word go, this tight band shows its mettle with upbeat lyricism as evidenced in the opener "Believe." A Chick Corea Return to Forever era influence is apparent with "11:11 Spirit," Fender Rhodes to the fore. The title track clearly displays what a drum-led group sounds like, Alex Garcia's intelligent and incisive percussion beating a path for the others to follow.

The irresistible theme of "Azul Infinito" burns into the memory banks just as subtle interludes with piano and drums play off one another, succeeded by the lively "Coltranesque" in which Ariel De La Portilla offers up a fluid and hair-raisingly-fast bass guitar solo. Mike Eckroth's electric piano introduces the underlying template to "Landscape Of A Thought" which is swiftly joined by a soaring soprano melody line. Here Eckroth performs a lucid solo followed by a soprano sax solo by Ole Mathisen before he re-introduces the theme.

Ole Mathisen creates appropriately screeching exotic tones at the start of "Los Andes" in which his soprano playing is both lithe and forceful. By the end of the final track "Purple Man" it would be difficult for the listener not to be tapping in time to the music.

Chilean born, New York-based Alex García benefits from a talented group of musicians performing these, his own compositions and arrangements, which universally sound assured and engaging. Not bad at all for someone who came into music relatively late (aged 17), but judging by this album, it won't be the last and shows why this Latin jazz outfit is so good.