Thomas Maintz: This is the Color...

By JAKOB BAEKGAARD
August 9, 2010
Sign in to view read count 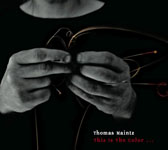 There's an idiomatic expression in English called "thinking outside the box," which means that trying to think creatively, unimpeded by conventional restraints. In the case of Danish guitarist Thomas Maintz, the expression is taken quite literally. Using a box with postcards of famous paintings, Maintz randomly picked a card and improvised over it, and the result is three lyrical pieces inspired by Joan Miró, Pablo Picasso and Edward Hopper.

Miro's painting, "This is the Color of my Dreams," is the source for the opening track, which also gives the album its title. It finds Maintz translating the subtle beauty of Miro, a blue spot placed on yellow paper with artful lettering, into a short lyrical piece where each line speaks with melancholy sweetness. A feeling of sadness also pervades through the interpretation of Edward Hopper's "Morning in a City," where the gazing woman of Hopper's painting is shown through slowly breathing chords. On the other hand, Picasso's "Nude in Red Armchair" is illustrated by a far more oblique voicing, making an homage to the Spanish master's unusual perspective.

Besides the three solo improvisations, This is the Color... also features thoughtful readings of two standards—"Someday My Prince Will Come" and "Alone Together"—but the highlights come from Maintz's own hands. "Six String Levitation" is a dynamic guitar composition, supported by the strong rhythm section of bassist Thomas Fonnesbæk and drummer Morten Lund, who has recently received wider attention as a vital part of Stefano Bollani's Danish trio. Here, he adds his trademark: a multi-percussive, lightly swinging style that works perfect with Maintz's singing lines, who uses his voice as an extra textual component in the manner of Kurt Rosenwinkel. Another important player is saxophonist Jesper Lovdal, whose cool yet fiery playing provides a nice contrapuntal touch to the guitarist's lyrical musings.

This is the Color... is a convincing study in sound and shape. Melodically persuasive and rich in contrast, the album fits perfectly into the wave of new Danish melancholy, and yet Maintz emerges completely as his own man. Whether working solo or in group context, there's a sense of contemplation and care to his playing, as if each note is carefully considered, which makes the album a spellbinding experience worthy of the painterly masters of mood with whom the guitarist engages.

Miro (This is the Color of my Dreams); Nocturnal Worm in the Big Apple; Picasso (Nude in Red Armchair); Six String Levitation; Someday My Prince Will Come; This is Not a Blues; Riddles Dressed in White; Alone Together; Hopper (Morning in a City); For All the Presents I Never Bought You; Please Hum (A Hymn).