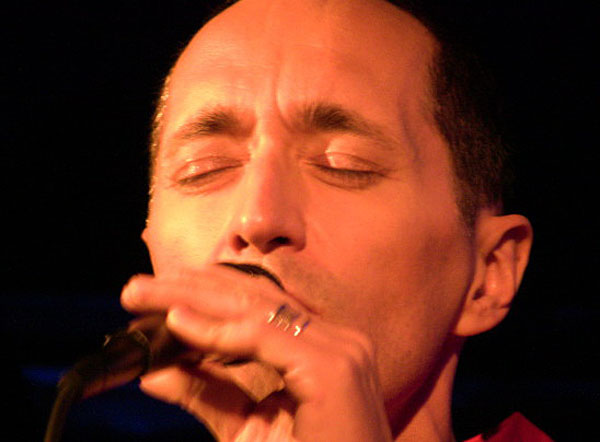 Kate Bush is an iconic singer in the UK and in many other countries. As a nineteen year-old, she released her first album The Kick Inside (EMI, 1978), which contained two major hits: "Wuthering Heights," based on a television adaptation of Emily Bronte's famous novel; and "The Man With the Child In His Eyes," which contained many Bush trademarks, such as her distinctive melodic dip to a lower note in the middle of a phrase. This aspect of her music provided a unifying element for singer Theo Bleckmann's "Hello Earth! The Music of Kate Bush" performance in Greenwich Village, which was almost like a mini-opera, given this "Bush hook," the lyrical subject matter covered by the songs—and, of course, Bleckmann's classical/dramatic approach to singing.

Bleckmann is known for distinctive art song performances of songs spanning from Charles Ives, Bertolt Brecht and Kurt Weill to The Great American Songbook and, now, Bush. When asked what the common element is between these writers, Bleckmann's reply is: "great songs." His voice is clear and expressive, and can have a kind of mallets-on-antique-china quality. Bush's music has a classical-like purity, a quality on which Bleckmann has alighted, bringing his own distinct high art interpretation to her pieces. Musically, he showed that she is one of the chapters in the illustrious world of song, which traces itself through history via the medium of composers such as Dowland, Schubert, Schumann, Wolf, Ives, Weil-Brecht, Gershwin, Rorem, the Beatles and Sting.

Bush's lyrics are also unique, presenting a different view on the world, covering topics such as nature, identity, and survival. Presented together, as Bleckmann did at his gig, Bush's various subject matters and imagery almost sounded like The Discovery Channel, before it existed: cloudbursts, hills, water and ice. There is profundity, and some of Bush's are written from unusual aspects.

At Le Poisson Rouge, an appropriate and exotic venue for this kind of performance, Bleckmann looked and even performed on the small stage like a stadium rock star. The focus of his music was similar, in some ways, to Mike Patton, but he is firmly rooted in art song. The concert began with Bush's classic "Running Up That Hill," from Hounds Of Love (EMI, 1985), a very good example of how Bleckmann communicated the depth in lyrics: "If only I could make a deal with God, I'd get him to swap our places, and I'd be running up that road be running up that hill..." Bleckmann took great care to be very expressive; even his clothing was carefully prepared. Often wearing red and orange colors, the singer occasionally cut a figure like a red-bedecked Cole Porter, at times as much an actor as a singer. It was all, of course, to aid the voice: Bleckmann is a very visual singer, making it possible to easily see him singing—and the lyric's scenario—even when listening to him on record.

Bleckmann's band included drummer John Hollenbeck (a frequent collaborator), electric violinist/guitarist Caleb Berhans, bassist Skúli Sverrisson, and pianist/keyboardist Henry Hey, augmenting Bleckmann's own contributions with electronics—filtering and sampling, and adding reverb to his voice. Introducing the band after the first number, Bleckmann said how pleased he was to be on stage with them, " [each of them] great composers in their own way."

On "Running Up That Hill," Hollenbeck's insistent, meaningful drumming played almost as big a role as Bleckmann's singing. Of the song, Bleckmann said: "[It is] maybe one of Kate Bush's more famous songs that made it to the US, from Hounds Of Love, her Kind Of Blue... album, 1985." He included five songs from the album in his performance.

Hollenbeck was tremendous throughout the gig, as was the entire band, which read from scores. Sverrisson was right on the money, as was the virtuosic Berhans. All of these aspects, coupled with Bleckmann's brilliant arrangements, instrumentation, and relaxed use of electronic voice processing, created a rich performance with tasteful textures, appropriate for the journey through Bush's dramatic and atmospheric songs.

"Hello Earth," also from Hounds Of Love—and the song Bleckmann used to title his Bush project—began with a thunderous violin entrance, before Bleckmann traced Bush's story of climbing out of her car and looking up to the sky, where she sees a space shuttle "travelling fast." Yet it was also written from the point of view of a person in the shuttle, hence the title. Bleckmann's version of the song was ten minutes in length, enabling the singer and his band to build up quite a degree of mystery. Bleckmann interspersed a slower middle passage with spoken words and an electronic take on mouth harp. As piano added spiky angular notes, Bleckmann's vocals and the new rhythm made the music sound a little like The Talking Heads. Once again, Hollenbeck assumed an important role. 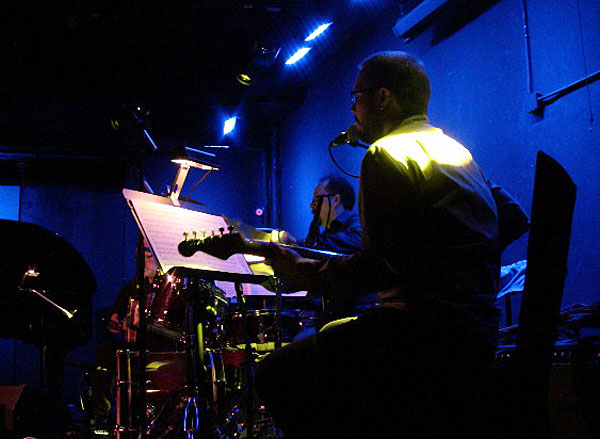 An interesting tune called "Breathing" followed, from Bush's Never For Ever (EMI, 1980). Bleckmann introduced "Cloudbusting," from Hounds Of Love, as based on the true story of a son watching his father—Wilhelm Reich, a contemporary of Sigmund Freud and a later friend of Albert Einstein—being deported by the American authorities over his invention of a machine that could start rain. Bleckmann also commented on the audience's recognition of album names: "I'm glad to see that people know her music." Jaunty, yet haunted music, somewhat reminiscent of The Beatles' "Eleanor Rigby," greeted the audience.

Then there was "All The Love," followed by "Saxophone Song," the latter from The Kick Inside, which began with a fast, jazz-style bass and drum rhythm. Rapid piano and choppy violin joined in, the violin soon becoming melodic. The fast pace was kept up through Bleckmann's vocals, until a falsetto passage. Berhans delivered an astonishing electric violin solo, his instrument sounding like an electric guitar but eventually played much faster than it might seem a guitar could play. All the while, Hollenbeck clattered under the solo, his sheet music in front of the snare.

As the solo wound down, attention was drawn to Bleckmann—seated, and holding a xylophone-style mallet in his right hand and what looked like a tiny toy grand piano in his left, segueing into "Army Dreamers," from Never For Ever. Bleckmann highly recommended the album for the cover art, explaining that the song told the story of a doomed soldier: ..."what a waste of army dreamers." Bleckmann whistled the song's figure, as the verse turned into call-and-response, with the band members singing and Bleckmann answered. After the song, Bleckmann said there are not enough anti-war songs: "Not enough songs, quite enough wars."

The next song was "And Dream of Sheep," Bush's song written from the perspective of a person struggling to survive in the water in a life jacket. As Bleckmann explained, the point is that in order to live you have to stay awake, not fall asleep. "A lot of her songs are about dreams and dreamscapes," said Bleckmann. He also said they would go straight from "And Dream of Sheep" into "Under Ice," from the viewpoint of a person under the ice looking up at ice-skaters. Having once been a figure skater, Bleckmann joked, he had to do this song. Berhans, again on violin, played the repeated three-note figure on the words "under ice" in a minor key, as Bleckmann sang what the watcher could see from below. It was indeed a bit creepy, as the singer earlier described "Breathing."

As the concert neared to its end, the band performed Bush's signature song, "The Man With The Child In His Eyes." The drifting melody was in three parts—a melodic masterpiece—and Bleckmann did it justice, in his own distinctive way.

"Love And Anger" was the final song; an upbeat number, after which Bleckmann referred to the last hurrahs of summer outside in the street, saying that Le Poisson Rouge was his favorite place for singing. This venue---once The Village Gate—is certainly unique, combining the advantages of an intimate room with the effect of a large stage performance.

Bleckmann's Bush project achieves something new in rock/popular music: a presentation of the work of a rock writer by, essentially, a popular music group, rather than the more common large scale orchestral arrangements that are sometimes made of a band's oeuvre. Better with a band of guitar and piano—and here, the expressive violin—the music was closer to the original, and didn't lose anything in translation. In time, more performers may follow Bleckmann's lead, performing entire concerts focusing on the music of a particular writer, either in the same or similar arrangements. 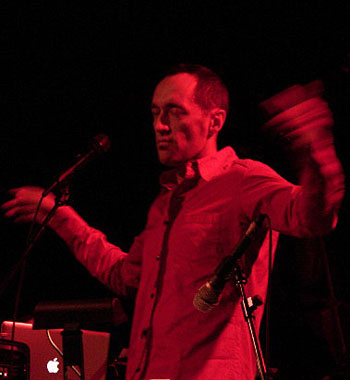 Drawing out music like this will also mean that the artist being covered, if no longer active, lives again. It is analogous to a performer/interpreter resurrecting a temporarily neglected composer. As more people discover it, the uncovering can build up a head of steam and run. It is also possible that some might even feel that Bleckmann's versions were more communicative than those of the original artist. The perfect articulation of his voice, as well as his acting, was very expressive, and may have communicated the lyrics in a clearer way. Part of this may be that he has a male voice, with its more centered, cello-like range. Bush is the composer and lyricist of these powerful songs, but Bleckmann may have provided a more definitive and lasting medium for their performance; irrespective, Bleckmann's singing clearly stamped the messages.

Bleckmann and his brilliant band have done something significant with Hello Earth! The Music of Kate Bush. They have unearthed what is essentially, for many Americans—and for others, who may have forgotten or missed it—a new body of music. As a quasi-classical performer with his own distinctive style and sound, Bleckmann presented it in an ideal, tasteful and colorful way. After performing and recording with a variety of musical accompaniments, from solo piano to symphony orchestras, with Hello Earth, Bleckmann has again amply shown his versatility as a singer and conveyor of important music. Bleckmann is a messenger for these works, and a perfect filter. A recording is planned for next year.