By GLENN ASTARITA
August 11, 2009
Sign in to view read count 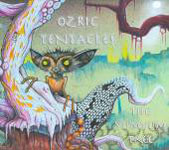 This 2009 date doesn't proclaim anything strikingly new, when considering the band's signature fusion of prog and space rock; however, it does present a rather phantasmagorical climate, teeming with MIDI treatments and a moveable wall of sound.

Ozric's music resonates—it's largely about sparkling and multicolored psychedelics, complete with MIDI-vibes and a few ethereal segments, sometimes abetted by notions of weightlessness.

In addition, the program gels via the artists' balanced approach, consisting of asymmetrical parts, rock and supersonic jaunts into the cosmos. Ozric Tentacles doesn't travel at the speed of light, but offers a steady-state audio experience to a solar system adventure for the body and spirit.