The Year of the Trio: Fred Hersch and Masabumi Kikuchi

By HRAYR ATTARIAN
October 19, 2012
Sign in to view read count
The grouping of piano, bass and drums is perhaps the most popular combo in jazz and hence 2012, like most years, has seen its share of sessions in that format. It is, however, not because of the quantity of the output but because of the issuance of two exceptional albums that it should be known as the year of the trio. 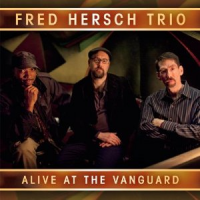 Alive at the Vanguard

Despite or maybe because of his recent brush with death, pianist Fred Hersch's Alive at the Vanguard crackles with an intense vitality. Recorded live at the Village Vanguard in New York, the double-CD set covers two separate dates during the trio's tenure in February 2012 at the legendary club. The tracks consist of American songbook standards, bop classics, and Hersch's originals (some of which are dedicated to other jazz masters).

"Tristesse," for example, was written for Paul Motian and opens with a contemplative and mournful piano sonata but as John Hébert's lyrical bass and Eric McPherson's subtle brushes join in, the wistful theme takes on a quiet, celebratory feel, making it the perfect musical eulogy.

The three musicians often engage in ad lib conversations that are edgy, intelligent and completely in synch with one another. The original "Rising, Falling" features dense, fugue like piano lines, atmospheric percussive polyrhythms and a singing bass that together bring forth a single stream of consciousness that shimmers with poetic beauty.

Hersch has an intriguing habit of amalgamating tunes that sometimes appear quite disparate but under his deft fingers flow and melt seamlessly into one another. Hammerstein and Kern's "The Song is You" is fused with Thelonious Monk's "Played Twice." The romantic impressionism of the track is reflected in Hersch's gentle cascade of notes as Hebert's strings sing of heartbreak in the rustle of McPherson's brushes on the trap drum. The piece evolves into a natural angularity as the tempo picks up on the Monk part of the medley. Hersch quotes from other Monk compositions over his band mates' boppish and hypnotic duet.

The unique camaraderie and the high caliber musicianship of the artists makes this double album spanning almost two hours captivating and strangely addictive. 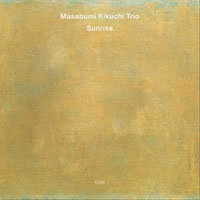 Pianist Masabumi Kikuchi's Sunrise is, on the surface, very different than the Alive at the Vanguard. Where the latter is steeped in tradition, full of dense and intricate harmonies, the former is sparse, abstract and forged on the spur of the moment, but with a Zen-like beauty; atonal, sublime and powerful. What makes both records similar in their perfection is the intimate communion among the members of each trio even at its most jagged interaction.

Kikuchi's transcendent concoction of sound and silent pauses brings a lyrical touch to the three "ballads" that open, close and bisect the disc. On the first, "Ballad I" his caresses of the keyboard mixed with Paul Motian's reserved brushes and cymbals and punctuated by Thomas Morgan's dark vibrations conceive a contemplative atmosphere filled with rarefied and elegiac extemporizations.

The second, "Ballad II," although equally economical in musical expression, is more melancholic and mellifluous. Motian brings an uncommon lyricism that is reflected in Morgan's arrhythmic plucked bass strings, while sparkling dark tonalities trickles out of Kikuchi's piano.

The aptly named "Last Ballad" is an exercise in improvised doggerel with lilting group interplay. What makes the disc more poignant is that it was released after Motian's passing and is in a way a homage to his distinguished legacy and his superior skills. The cadence of his drums drives the title track, that starts as an evolving duet between Kikuchi and Morgan until all three instruments coalesce into one intellectually complex and emotionally satisfying spontaneous creation.

On "So What Variations," Motian's simultaneously melodic and dissonant thrums and strikes form the foundations for a gratifyingly unfettered and fresh flurry of notes that lack a conventional form but maintain a stimulating internal logic.

Kikuchi's Sunrise is a challenging and rewarding work. The remarkable insight these musicians have into each others' artistry enhances the spirituality of the opus and make the disc an unmatched gem of its kind. That this is Motian's first posthumous release makes it even more memorable.

Two very different pianists, Hersch and Kikuchi, are nevertheless like-minded in the collaborative approach they have to creating music, utilizing empathetic players with whom they build an indivisible unit of innovative force.

Alive at the Vanguard

Tracks: CD1: Havana; Tristesse; Segment; Lonely Woman/Nardis; Dream of Monk; Rising, Falling; Softly, As in a Morning Sunrise; Doxy. CD2: Opener; I Fall in Love Too Easily; Jackalope; The Wind/Moon and Sand; Sartorial; From This Moment On; The Song Is You/Played Twice.