Bobby Lyle: The Way I Feel 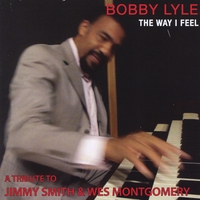 Pianist and composer Bobby Lyle's first encounter with the great Hammond B-3 player Jimmy Smith was in a Minneapolis nightclub called Big Al's, where the then-teenaged Lyle performed as the "local talent" on the downstairs stage. Upstairs, Smith was playing as the headliner and Lyle, after finishing his set as quickly as possible, raced upstairs to hear Smith and perhaps shake his hand.

"Jimmy was a black belt in karate," says Lyle of that first meeting. "So when he shook my hand, he almost broke my little fingers!"

Lyle would go on to teach himself the organ on the job by playing organs he came across in Minneapolis' nightclubs, including the occasional strip club. There are some things you just can't learn in a music conservatory.

The Way I Feel, is Lyle's tribute to Smith—who, shortly after that memorable first handshake, became a personal mentor and friend to the young organist/pianist. This recording, Lyle's first since 2006, may come as a surprise to those who know him only for his beautifully arranged and produced chart-topping albums of jazz, funk, fusion, and so-called smooth jazz, as it is the first album where Lyle plays Hammond B-3 organ on every track.

The CD is also a tribute to the great guitarist Wes Montgomery, who recorded several popular, genre-busting albums with Smith back in the sixties. Houston-based guitarist Brennen Nase steps up and steps into Montgomery's role and his playing is a joy to hear. Montgomery's sound and technique—not to mention right hand thumb—were truly one of a kind. Nase easily navigates what amounts to several decades of guitar history, channeling Montgomery on the standard "Baby It's Cold Outside" and the Lyle-penned tribute, "Feelin' Wes," bringing some inspired funk to Lyle's "Horizon," and stepping on the distortion pedal for "Hard Workin' Man," which includes some vocals from Lyle and the CD's featured drummer, Patrick Williams.

Not content to just recreate a 1965 Verve recording session, Lyle brings the Hammond B-3's legacy into the 21st century for a program that includes New Orleans second line, gospel, and even sixties-era go-go music. The playing on The Way I Feel is tight and inspired and Lyle's organ playing burns throughout.

Smith may arguably be responsible for making the Hammond B-3 a "viable lead jazz instrument," but with The Way I Feel, Lyle and his co-conspirators carry that legacy and kick it into a funky future.