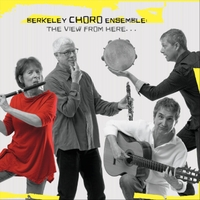 Like its organic natural wonders, the music of Brazil seems to flourish in different forms and styles of beauty. But much of its music has grown from the root of choro: Born in the mid-to late-1800s from the joining of Afro-Brazilian dance and jazz rhythms with European salon and chamber music, choro was simultaneously a seminal influence on Heitor Villa Lobos and other Brazilian classical composers, and in the fertile riverbed from which samba and bossa nova ultimately flowed.

The View from Here surveys choro from the perspective of the Berkeley Choro Ensemble, which flutist Jane Lenoir founded in 2010 to enhance "the performance of recent choro works and collaborations with renowned Brazilian performers and composers." Clarinetist Harvey Wainapel sings the Ensemble's other lead voice, complemented by guitarist (and Rio de Janiero native) Ricardo Peixoto and percussionist Brian Rice; Rice and Lenoir are co-founders and joint artistic directors of the Berkeley Festival of Choro.

Much of The View From Here underscores choro's emphasis on form as well as feeling. Written by celebrated producer, arranger, composer and pianist Cesar Camargo Mariano, "Choro #7" sounds so beautifully structured it suggests a Satie reverie, the sonic equivalent of a warm soft summer breeze full of rain and fragrance and hope and wonder. Wainapel's husky clarinet leads Lenoir's flute, floating and trailing like a kite, and the rest of the ensemble through "Do Mingus," while flute and clarinet play hide and seek with the melody to "Choro Manco," which sounds more baroque, formal and yet warm.

"Nesse Momento" delivers bigger and more complex sound via this same small instrumentation and volume. Guitarist Peixoto waves his classical acoustic sound in the direction of Spain rather than Brazil, more forceful strumming to accent the rhythm, with percussionist Rice gently pattering underfoot. Wainapel's clarinet solo is as light and beautiful as you can play that sometimes thorny instrument. It's easy to hear the chamber music aspects of this choro as its instrumental components organically grow and flow into each other like vines naturally climbing up a fencepost.

Made possible in part by a grant from the San Francisco Friends of Chamber Music Musical Grant Program, The View from Here is full of classic compositions, expertly and fondly played. In any country or language, that's beautiful music.