Matte Henderson with Marco Minnemann: The Veneer Of Logic

By GLENN ASTARITA
January 23, 2014
Sign in to view read count 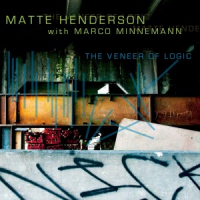 Guitarist, composer and futurist Matte Henderson is a former student of iconic progressive rock guitarist and founding father of King Crimson, Robert Fripp. He integrates some classic prog fundamentals such as odd-metered crunch chord voicings and wily rhythmic episodes, abetted by his collaborator and all-universe drummer Marco Minnemann. But Henderson spices up the program with muted voicemail vocals by David Torn and Dr. Know (Bad Brains) on a few tracks, amid recordings from prison parole hearings that spark remembrances of the late Captain Beefheart's good- natured anarchy.

Henderson has performed with diverse stylists, including Torn, pop diva Natalie Merchant, avant-garde guitar hero Henry Kaiser and a slew of other notables. For instance, with drumming samples from Pat Mastellotto (King Crimson) and Marlon Browden (Greg Osby Band) injected into the mix, the agenda boasts a mesmeric array of structural components and witty digressions. Henderson's raging single note licks leave a trail of dust within the serious-minded forays and the uncanny composition-based transformations. With former associate, bassist Tony Levin (King Crimson, Peter Gabriel) and others laying down a massive bottom, the program also features a '60s style pop groove on "Bible Camp," featuring a bubbly organ vamp and Gwen Snider's alluring and highly melodic wordless vocal overlays. Here, Henderson conjures a retro and tuneful radio friendly vibe that could have been the opening song for a B-movie.

Henderson states that "Single Cell Shark" was inspired by David Torn's boundary-breaking [guitar] work. Therefore, he launches the piece with a placid acoustic guitar part before sojourning into a maniacal electric-based meltdown, awash with weighty chord voicings, fuzz-toned leads and a diminutive storyline. On other tracks, Henderson summons ghostly apparitions, using or perhaps sampling Eastern stringed instruments and electronic effects with textural layers. Nonetheless, each piece stands on its own as the artist rides the wave of a hard-hitting, yet suspenseful program.

The companion DVD parallels each composition and is often uproarious. Henderson's mosaics are seemingly culled from '50s and '60s film clips, interspersed with cartoons that visually mimic each piece. For example, during the video for "Bible Camp," we see an Ozzie and Harriet like family, possibly infested with post-atomic bomb radiation, and children running around a set adorned with paper machete greenery.

After a few listens it sunk in that The Veneer of Logic defies most progressive rock doctrines as Henderson constructs a façade around convention. Thus, he polarizes the typical model via an artistically oriented impetus, etched in sight and sound.