Andrea Centazzo: The Soul in the Mist 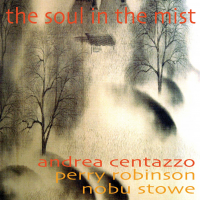 The music from Soul in the Mist was taken from two live performances towards the end of 2006. Having heard most of this music performed at the Rubin Museum as part of its Harlem in the Himalayas program, I can say that the quality of the earlier performances and their recording was very high indeed.

Andrea Centazzo is an outstanding percussionist, both naturally and electronically processed. Thirty years ago, his independent label, Ictus Records, was in the forefront of the European free jazz scene, and much of this extraordinary music has been collected in the 30th Anniversary Collection (Ictus Records, 2006). This release is a part of the renaissance of both the label and Centazzo's activities in creative improvised music.

Part of the experience at the Rubin Museum was the enormous drum/electronics set that Centazzo played, which included multiple sets of small, stacked cymbals that resembled pagodas, and which took up a good portion of the stage. Pianist Nobu Stowe was on the left while clarinetist Perry Robinson stood, totally exposed, in front of both of them.

Hearing this music disembodied, so to speak, is a different thing. That which could be considered a distraction, such as the amount of movement by Centazzo, is not there, allowing the almost mystical emotions and images produced to come solely from the music.

One of the first things that will be noticed is the highly tonal and melodic playing of Stowe and how it collides and interacts with the free rhythms of Centazzo. The music almost never has a clear pulse, and yet the figures Stowe plays can be felt to be within time. As he demonstrated on the Moments recordings (Konnex, 2006), Stowe is an improviser who likes to live within the tonal/melodic and free/arrhythmic worlds simultaneously. How he reacts with Centazzo's percussion and electronically-produced notes is fascinating, and produces much of feel of the music.

Robinson's clarinet is the obvious "lead" instrument, and he shows himself to be always listening to the atmosphere that is set up behind him; he might play a perfectly formed melody, or screech and wail. His sound, being made by breath, is naturally the closest to humanity, and his playing, within the framework set up by Centazzo and Stowe, is amazing to hear as he pours himself out.

While each track digs deeply within the emotional space it creates, the first three—"The Soul in the Mist," "Another Situation" and "The Cry"—astound for the twenty minutes they encompass. Huge spaces are created, and their darkness and shadows become filled with light. The listener might almost feel as if he is looking down on creation happening in the moment and be filled with joy, anguish or wonder.

The Soul in the Mist is a magnificent creative work by this trio of musicians, and will repay close listening many times over.

The Soul in the Mist; Another Situation; The Cry; Twenty Years Later; Last Song; Pan Dance; A Foggy Day in Philadelphia; The Voices.