Alexander McCabe: The Round 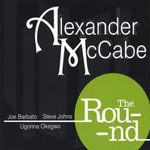 You've got to give credit to altoist Alexander McCabe for providing the music on his debut recording at his own pace, which means initially unhurried and lyrical, yet full of ideas. McCabe may be a free blower in clubs, but you'd never know it here.

The opening "Floating" is a perfectly-named vehicle for its dreamy, yet sturdy melody; McCabe plays long lines that are reminiscent of the better altoists from the 1950s West Coast School of jazz. During his solo, McCabe's intensity builds logically with the addition of support from Barbato and the group. Barbato's original "Taylor Made" begins simply but once again builds into a urging yet attractive tune. On the title track, Barbato switches to accordion and, in so doing, lends a Celtic influence to the group's texture, playing the melody along with McCabe's alto and almost providing a "two-horn" front line. The resulting feel is that of an Irish Pub on a busy afternoon that still carries a bit of contemporary bebop flavor. The ballad "Village Walk" provides a fine opportunity for McCabe to show his admiration for Cannonball Adderley and Jackie McLean while taking a lengthy tour of Greenwich Village.

Generally, the second half of the album is more standard up-tempo bebop territory in which McCabe & Co. skillfully navigate the melodies. Barbato plays accordion on two other titles: "Jugo," which is done in a modified Cuban rhythm, and the concluding "Salvo." All of the tunes are originals, with two from Barbato and one from Johns.

Floating; Taylor Made; The Round; Vilage Walk; Jugo; Yours; A Cry From the Rain Forest; Salvo.