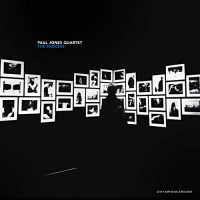 On the surface it can be viewed as somewhat ironic that an album dubbed The Process is actually saxophonist-composer Paul Jones' least process-driven recording. His debut, Short History (Blujazz Productions, 2014), and its brilliant follow up, Clean (Outside In Music, 2017), are, after all, far more focused on procedural formulations and architectural specificity than this quartet date. But to focus on that is to miss the point. Process doesn't need to equate to intellectual rigor. Sometimes, it can simply reference its definition by pointing toward the manner by which things are accomplished.

Working with a tour-and-document philosophy by taking to the studio at the end of a two-week European jaunt, and building an entire album around first takes, Jones recalls a manner of music-making—a process, if you will—that speaks somewhat to the past while delivering sounds that are firmly grounded in the present. Given this touring time to develop a partnership and sink their souls into the music before anybody pressed the record button, these musicians were able to truly become a band. That's evident in what's heard across these eight tracks. It's rather sad to note that regularly playing with the same musicians for an extended time like this has become a rarity for all but the upper tier in jazz, but it's a pleasure to hear what happens when these pieces fall into place for Jones and his band mates—Dutch guitarist Syberen van Munster, British bassist Tim Thornton, and Italian drummer Francesco de Rubeis.

The Process opens on two numbers that appeared on Jones' previous album—"I Am An American" and "Clean." The basic DNA of the lead-off track remains largely unchanged from its earlier incarnation. Even though van Muster's guitar lends it a lighter texture here, the song still plays as cool-headed swing. "Clean," however, feels different. The tension on the original was palpable. Now, it's less of a factor. The energy and drive, however, still carry through.

The six tracks that remain deal in different environments. "Beaten By The Machine" presents an open and airy space for extemporization, the title track playfully toys with odd-meters, "Untitled Tango" trades in sinuous lines, and "It Might As Well Be Spring" provides rare insight into Jones' approach to Great American Songbook fare, as only the second such classic he's recorded across his three albums. Then the album comes to a close with a bounding "Dirty Curty" and a tight ride through "The Morning Blues," complete with strong solos from both Jones and van Munster.

The process is always less visible than the product, but both are worth talking about in the case of this date. When musicians are given the time to bond, the end results of a recording will always be stronger. This engaging effort most certainly bears that out.

I Am An American; Clean; Beaten By The Machine; The Process; Untitled Tango; It Might As Well Be Spring; Dirty Curty; The Morning Blues.