Eri Yamamoto Trio: The Next Page 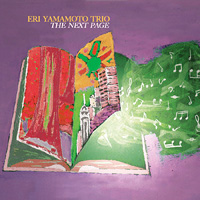 It is arguable whether a bar is the right venue for jazz in the 21st century. On any given night most of the punters are there for a chat with friends over drinks, maybe to pick someone up, and just perhaps to appreciate the music. For the last decade, Japanese pianist Eri Yamamoto and her trio have held down a regular weekend gig at Arthur's Tavern in NYC's Greenwich Village. Anyone who has made their way along the narrow bar to the miniscule performance space at the far end is in for a treat.

Yamamoto was inspired to move to NYC and take up jazz after hearing pianist Tommy Flanagan on a visit and falling in love with his swing and harmonic finesse. Like her previous Aum Fidelity releases including In Each Day Something Good (2010) and Redwoods (2008), this seventh outing by her trio charts a personal take on the modern mainstream. Over the course of a generous 70-minute program, split by 60 seconds of silence to replicate two sets, they make sophisticated interplay seem effortless, without resorting to showy effect or abstraction.

Yamamoto's builds her attractive happy-sad tunes from catchy motifs and understated blues inflections, before extending them into rhythmically insistent horn-like solos. Bassist David Ambrosio plies garrulous counterpoint, reaping almost as much time in the spotlight as the leader for his tautly considered lyrical solos. Ikuo Takeuchi's airily propulsive drumming buoys without ever descending into a constant pattern: he implies the beat from closely assembled fragments, even at speed. Takeuchi has been with the pianist since the start, while Ambrosio's tenure stretches back to 2004. With so much shared history, it is no surprise that they cohere as a telepathic unit.

From the spare clipped melody and cantering bass vamp of "Just Walking" to the exuberantly rousing set closer, "Swimming Song," via the gently lilting "Dark Blue Sky," each musican is alert to the others felicities. Neat touches abound, like when all three lock briefly into a pleasing cadence on the sunny yet soulful "Green Grows" or when they playfully compress and expand tempo before building tension to a feverish crescendo with the author's drums prominent on Tekeuchi's nervy "Up and Down" (the only cut not penned by the pianist).

Economic realities mean that appearances in bars are unlikely to disappear any time soon. While Yamamoto's combo could make for a very pleasant backdrop to conversation, for those who dig below the surface there is a wealth of musical detail to savor.